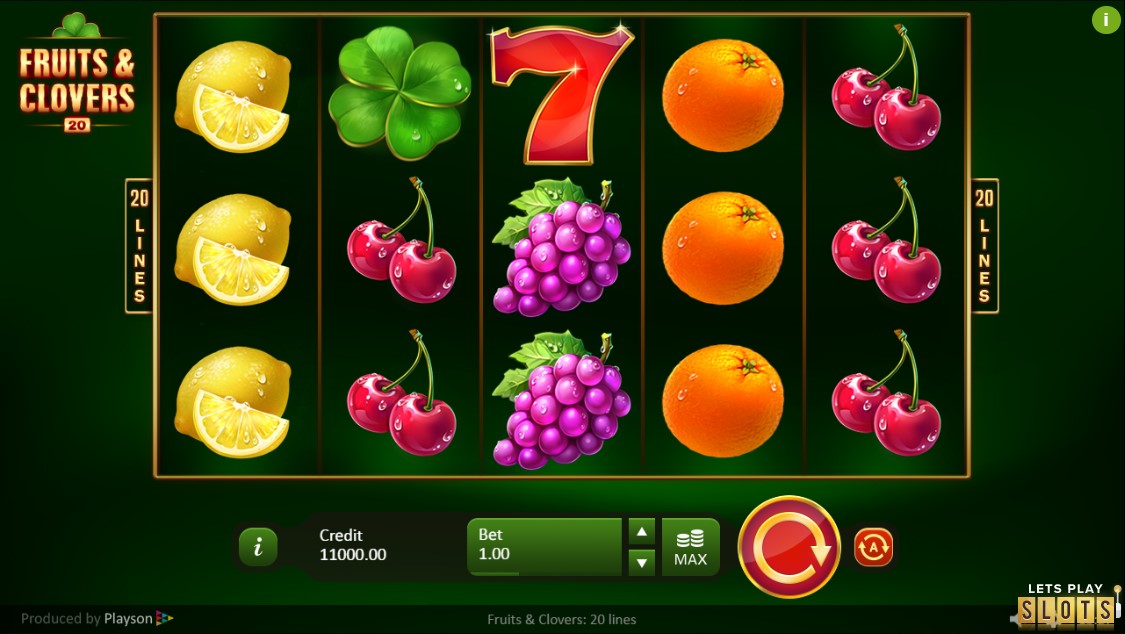 Fruits & Clovers may be at the forefront of this Playson slot game, but you’ll find that there’s so much more to enjoy about it than its symbols. It features both a Wild and a Scatter symbol, and the developer has included some amazing graphics alongside.

Anyone who enjoys experiencing the retro feel of some online slots will surely enjoy this Playson offering. Fruits & Clovers 20 Lines brings all of the fun and traditional entertainment to your screen, but includes one or two additional extras, as I was happy to find out. It’s definitely not one of the most technically advanced slot games you’ll ever find, but it can still entertain avid gamers for a while. 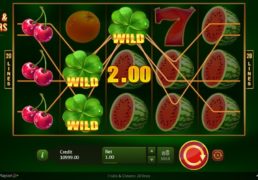 The game features a standard video slot layout that contains five reels and three rows altogether. This is quite the appealing standard setup for me, and it also contains 20 paylines. Of course, this is expressed in the slot’s own title. These lines aren’t changeable, but you can adjust the value of the wager that you place per spin. Just click on the “Bet” box and select one of the values between €0.20 and €100.

Not only that, but Fruits & Clovers 20 Lines also has some intriguing graphics for you to see. The symbols upon its reels are very high-quality images, mainly of fruits, which is where the retro part comes into play. The first three of these are the cherries, orange and lemon, which can all pay out up to €450. Then comes the bunch of grapes and the watermelon, providing rewards of up to €800. There’s also the inclusion of a red number 7, which is the slot’s highest-paying standard symbol. 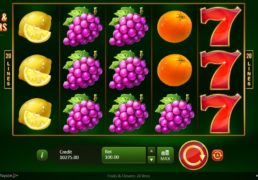 Fruits & Clovers 20 Lines is quite a simple game on the surface, and this doesn’t really change so much when you look at the extra inbuilt features. There’s the addition of a wild symbol, which is that of the clover. As a wild, this one can substitute for all other standard icons on the reels, helping you to form winning combinations. Five of this one on a winning payline will pay out up to €7,500.

The only other addition is the scatter symbol, which is that of the gold star. I like the fact that there’s a scatter in the slot, as this one can pay out from any location that it appears in. Five of them across the reels will reward you with up to €40,000 altogether! 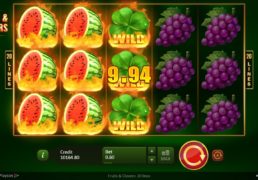 It’s true that Fruits & Clovers 20 Lines isn’t going to win any awards for greatest innovation in the slot world, but that doesn’t matter. It’s still quite entertaining to spin the reels of it and enjoy the traditional imagery throughout. The added scatter and wild perks give it that bit more of an edge, too.

Fruits & Clovers may be at the forefront of this Playson slot game, but you’ll find that there’s so much more to enjoy about it than its symbols. It features both a Wild and a Scatter symbol, and the developer has included some amazing graphics alongside.

Hurray! There is a competition going between users of our site!
You have to do nothing, but browse out site, and win a daily prize. Click here to read more.
You current ranking:
Time Left: 6h 27m 29s