Journey Back To The 80s With The New “Neon Pyramid” Slot 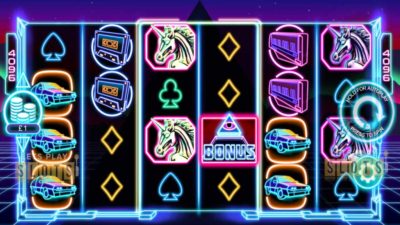 Inspired Gaming has decided to go back to the 1980s and create a new slot that showcases the past in a neon light. The latest game is titled “Neon Pyramid” and takes players to a neon grid desert with a pyramid very visible in the background.

The action all place in the desert with the pyramid in the background. The pyramid players a very important role in the game, so players should pay attention to it right from the start. Besides the graphics, the game has an electronica soundtrack that has hints of 80s disco music.

The initial gameplay comes across as rather basic. The grid has six reels and four rows and uses many winning combinations, giving players as many as 4,096 ways to win. Players will need a combination of three matching symbols starting from the left.

The betting range for this game starts from $0.20 and goes all the way up to $25. This game can be very rewarding though as players can get a maximum of 10,000 times their stake. The game has an RTP of 95.85 percent.

There are several special features that are visible in this game. Most of them involve the pyramid, which is why players should keep their focus on it. One random event that pops up often is the Reel Modifier. This happens when the top of the pyramid lights up. It then transforms the two middle reels into wilds. They also get a 3x multiplier. This can be a big chance for players to get a massive win.

Players will only need one symbol of any type to complete a combination. With all of the wilds, players will likely get multiple combinations when this happens. Combined with the multiplier, people can potentially hit a big jackpot.

Another special feature comes with the Free Spins. Players can trigger it by scoring three Scatter symbols. The grid is then replaced by a pyramid. It has four levels and players climb it. An initial spin is needed to learn how many free spins players get. During the free spins, a pyramid symbol takes players to get to the next level. Each advance in level gives perks like multipliers and free spins. The highest level will have a 10x multiplier and the two central reels becoming wild.

Overall, players will have a fun time with this game. Do give Neon Pyramid a few spins when it shows up at your online casino.

Hurray! There is a competition going between users of our site!
You have to do nothing, but browse out site, and win a daily prize. Click here to read more.
You current ranking:
Time Left: 2h 0m 35s