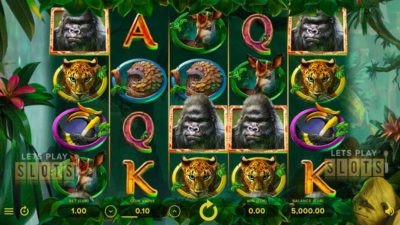 NetEnt is one of the oldest gaming developers around and has a great portfolio of online slots. The company has now released its newest slot called ‘The Gorilla Kingdom’. Players can explore this forested kingdom of the apes and see if they can come out on the winning side.

The Gorilla Kingdom is another NetEnt game which means it has all the polish that you can expect combined with excellent gameplay.

When players start this game, they will be take in into the jungle and enter a very green and lush environment. The sounds are also very appropriate to get the players in the mood to meet the Gorillas.

As for gameplay, players are presented with a 5×4 grid, which is an excellent beginning. The game has 1024 paylines for people to wager on. This game currently has a 96.03 percent RTP which gives players a decent chance to win.

The symbols for the game are divided into the usual set of low and high-value symbols. Low-value symbols include the royal card symbols. For higher value, players will have to score some of the more dangerous animals in the jungle. The most valuable one is the gorilla king himself.

The game allows for a minimum bet of 10 cents. But for those who like to live dangerously, they can wager up to $360 on every spin.

Though the basic gameplay is impressive enough, the game shines when the special features get triggered. The diamond symbols are the game’s scatter and are key to several special features being triggered. Players who score three or more of the diamond symbols will be able to get up to 20 free spins. During the free spins, the diamonds are still active. Getting more diamonds will result in even more free spins, which means bigger prizes.

The best feature active during the free spins is the symbol transform. When a Gorilla symbol appears, there is a chance it can become a mask of one of the animals. These masks are collected on the side while the Gorilla symbol is still active. The game has four different animal masks and players who can collect six of one type will see all of those symbols become Gorilla symbols, too.

Do give this new NetEnt game a spin or two when it arrives at your favourite online casino!

Hurray! There is a competition going between users of our site!
You have to do nothing, but browse out site, and win a daily prize. Click here to read more.
You current ranking:
Time Left: 22h 9m 14s