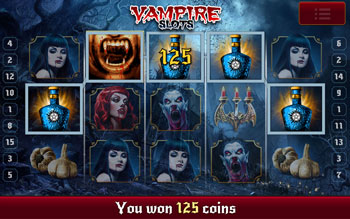 The online gaming developer, 1X2 Gaming has announced the release of its new slot game titled “Dark Thirst” that is based on a vampire theme. This is its second vampire game to be added to its gaming library and the game comes with spectacular features that will thrill you to the max.

Dark Thirst is a 5 reel, 25 line video slot game that deliver great graphics and sound effects depending an environment that is creepy and horrific. If you not afraid of the dark then play Dark Thirst.

As you play the game, the reels will showcase various symbols such as the wooden stake, a crucifix, Dracula, and garlic littering the reels. The game offers the Graveyard bonus feature as well as the Big Win Fire Feature.

The game is expected to be available through distribution channels such as the NYX OGS, EveryMatrix and Bit8 platforms and will also make way to some reputable casino brands.

The Chief Marketing Officer of 1×2 Gaming commented on the release of the slot game and said, “We believe that Dark Thirst will be popular slot game for the future and will become an instant classic for players who are searching for spooky and horrific betting experience.”

Hurray! There is a competition going between users of our site!
You have to do nothing, but browse out site, and win a daily prize. Click here to read more.
You current ranking:
Time Left: 11h 18m 34s