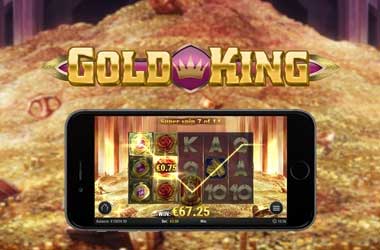 Play’n GO announced that it will be launching a new online slot game at the end of the month. The online gaming developer has released information about their new slot titled ‘Gold King’. The theme for this online slot circles around the riches of the fabulous Gold King. Players will be vying to get the King’s favor in this new slot game.

The new Gold King slot features five reels and three rows for its basic display. There will be 20 fixed paylines, with one fixed coin per line. There are several interesting features in the game like the Super Stack and Super Spins that can make the game more exciting for players.

Play’n GO will make the Gold King slot accessible via both desktop or mobile. The minimum bet is set at €0.20 and players will be able to go as high as €100 on every spin. The Gold King slot game has all the traditional card symbols of slot games like K, Q, J, A, and 10.

However, it is the special symbols that really make the game interesting. These are the jewels of the Gold King’s treasure horde as well as the Golf King. The face of the Gold King acts as the extra spin scatter symbol while the Rose is the wild symbol. If the Rose comes up, it can substitute for any other symbol except for the Gold King to help create a winning combination.

One of the special features is called Super Stacks. With this feature, a random standard symbol will be chosen. If the symbol pops up, it will fill 12 consecutive spaces on every reel. This makes it easier to complete a winning combination. Another special feature is Super Spins. When three Gold King symbols appear on reels 1, 3 and 5, this feature is activated. Players will then get 10 extra spins. During these free spins, players can earn an additional 2, 4 or 10 spins. This can be done by getting 1, 2 or 3 scatter symbols on the reels respectively. Player can earn an unlimited amount of free spins.

The new Gold King slot game will be launched by Play’n GO on February 26.

Hurray! There is a competition going between users of our site!
You have to do nothing, but browse out site, and win a daily prize. Click here to read more.
You current ranking:
Time Left: 1h 52m 38s