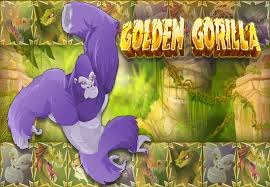 The Golden Gorilla comes with 5 reels, 50 paylines offering superb gaming features such as the stacked wilds, free spins, win Multipliers, and many more. During game play, you will come across a purple gorilla as well as other ancient creatures. The purple gorilla guards the golden treasure and your main objective is to please the gorilla and it will award you with some of its treasure.

The bonus feature known as the Golden Gorilla Super Round can trigger a hidden statue bonus round when 3 orange dinosaurs symbols show anywhere on the reels and players will be awarded with gigantic prizes.

Snow Wonder is a 3-reel classic video slot game that is based on a winter theme and similar to the traditional slots. It offers a top fixed jackpot of 1,500 coins and allows players to wager a max of 10 coins per spin. Like other traditional classic slots, Snow Wonder offers a single payline and offer the standard symbols such as the Sevens, and Bars.

Hurray! There is a competition going between users of our site!
You have to do nothing, but browse out site, and win a daily prize. Click here to read more.
You current ranking:
Time Left: 2h 51m 46s