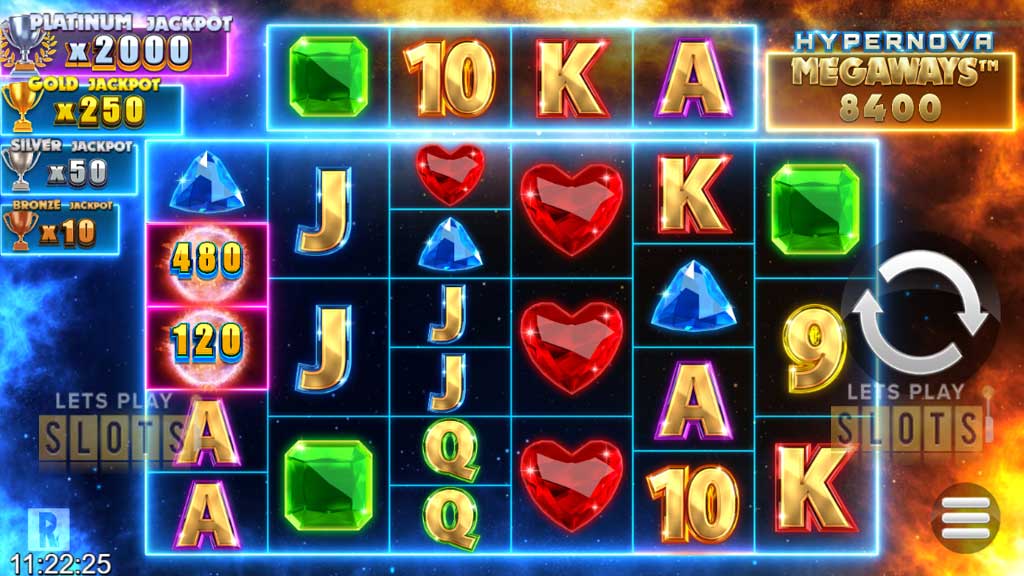 Hypernova Megaways is an over-the-top slot game that offers up to 42 Scatters and up to 117,649 ways to win, among other things. This is an excellent game that pays from many different directions. It has re-spins, jackpot symbols, and the Megaways – and this is probably one of the better Megaways games.

The game has six reels with between 2 and 7 symbols on each, which can lead to 117,649 Megaways. There’s an additional row of four symbols above the board, and this is actually part of the board, it’s an additional symbol for each of the middle four reels. One reel can have a maximum of 7 symbols, including the ones in the top row. You pay 20 coins to play the game, and the bet sizes can range between €0.20 to €100 per spin. 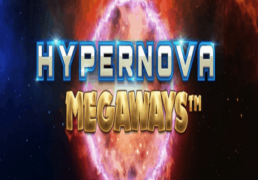 Every win will trigger a reaction, which means that every winning symbol – including those on the top row – will be replaced by symbols falling from above and this is essentially a re-spin where you get a new chance to form a winning payline. The symbols that remain on the reels will fall down to make way. On the top row, they’ll move right to left. Wilds only appear on the top row.

This is a low variance game as wins are very common, and so are consecutive wins, so despite the relatively poor paytable (per payline) as is expected for this type of game, you can keep going for a long time without going too deep into negative.

There are six card symbols that pay from 0.1x to 0.2x your bet for three-of-a-kind and peak at 1.2x for six Aces, and then there are four Gems, three of which pay decent prizes, up to 5 coins. Purple Diamond is the special symbol in the game as it can pay up to whopping 100x, which you’ll get for six of them on a winning payline. So, this is a low variance game that will help you maintain your bankroll, but then there’s the incredibly powerful symbol that can deliver a big win. 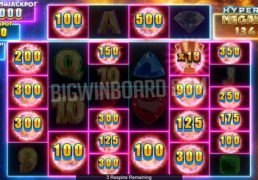 Six or more Scatters trigger the Jackpot Respins. You get 3 re-spins with all Scatter positions held, while the remaining positions spin. As you land new Scatters, they are also held, and re-spins are reset to 3. When you run out of re-spins the feature ends.

There are four different types of Scatters. Bronze will give 10x, Silver 50x, Gold 250x and finally Platinum Scatter will give a prize of 2000x your bet. This is again a great feature that will give you a decent win most of the time, but also provides a chance of winning huge amounts of money.

Theoretical return to player (RTP) if Hypernova Megaways slot is 96.10%, but the game is balanced so well that you start thinking RTP is over 100%. The game constantly awards you with small and medium wins, and your bankroll will likely be positive for a while, even before you’re lucky enough to land that huge win this game offers. A very, very good slot game.

Hypernova Megaways is perhaps let down a bit by technology and graphics, as it plays a bit twitchy, but when you look underneath the graphics, you’ll find a quality slot game that really plays well and pays well. Not only that there’s a powerful symbol that can pay a lot, up to 100x on a single payline, multiplied by the incredible number of paylines, but there’s also a jackpot up to 2000x up for grabs. Excellent game, play it for real money, it can pay on any spin and you don’t want that to happen while you’re playing for free money.

Hypernova Megaways is an over-the-top slot game that offers up to 42 Scatters and up to 117,649 ways to win, among other things. This is an excellent game that pays from many different directions. It has re-spins, jackpot symbols, and the Megaways – and this is probably one of the better Megaways games.

Hurray! There is a competition going between users of our site!
You have to do nothing, but browse out site, and win a daily prize. Click here to read more.
You current ranking:
Time Left: 16h 2m 59s