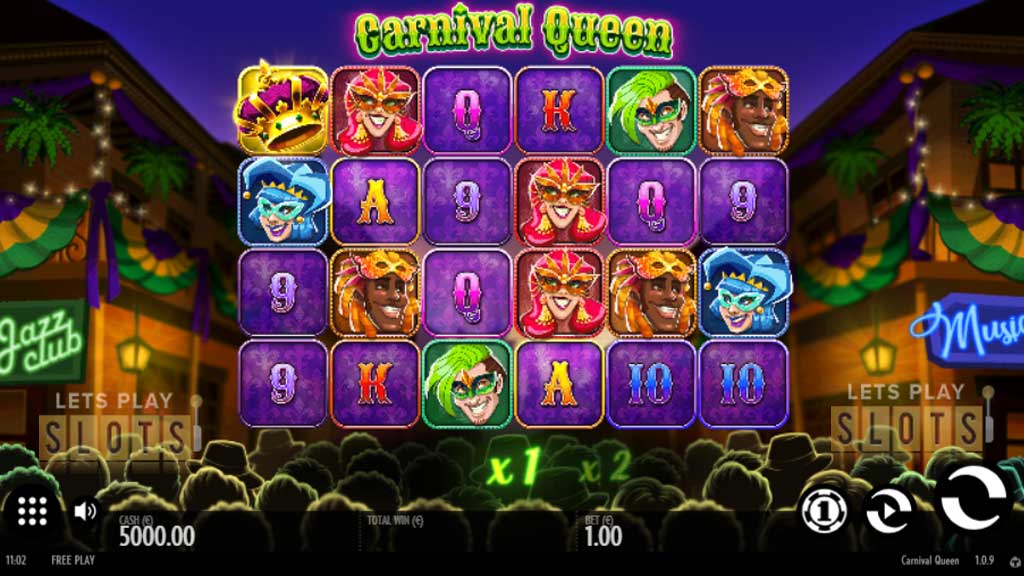 There’s no better way to celebrate something than with a carnival. Plus, when there’s a Carnival Queen in town, she’ll make you get up and start dancing. Prepare yourself for the appearance of the Avalanche Feature, Wild and Scatter symbols in this Thunderkick slot.

I have played a few online slot games over the years which incorporate the carnival theme, but I have to admit that Carnival Queen is one of the best that I’ve accessed. Coming from the Thunderkick brand, I knew that it would hold plenty of appeal from the get-go, but I wasn’t expecting it to be as good as it is. From stellar graphics through to wonderfully captivating inbuilt features, this stands out as being a great offering from Thunderkick. 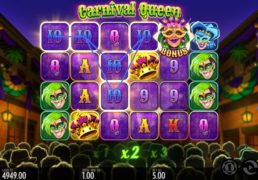 When you load the slot up, you’ll see that there are six reels on display, as well as four rows. Across this design, the developer has also chosen to add a total of 4,096 ways for you to win. These ways to win are not customisable, but the bet that you place on them is. You’re able to choose from values between €0.10 and €100 per spin in Carnival Queen.

The graphics that have been included in the slot are definitely one of its most impressive features. There’s a crowd of people who have gathered at the front of the reels to see the Carnival Queen. Then, upon the reels, you’ll see standard playing card symbols, running from 9 to 10, J, Q, K and A. The latter of these can reward you with up to €170 as a pay-out. Then comes various symbols of carnival revellers in blue, green, orange and finally red. The highest paying standard symbol is that of the gold crown though, which can reward you with up to €2,000. 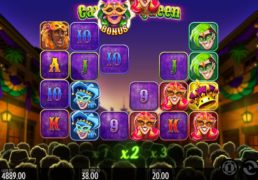 The first and most obvious feature of this slot is the Avalanche perk. This activates whenever you create a win on the reels. The symbols included in such will explode and disappear, leaving room for others to fall into the gaps. This continues on when more wins are formed and will keep happening until no further wins can be created. For each subsequent Avalanche, a multiplier increases at the bottom of the reels up to 7x.

There’s also the inclusion of a wild symbol, which I always enjoy seeing in slots. This will substitute for all other standard symbols, helping you to create wins.

The slot’s scatter symbol is present in the shape of the Carnival Queen herself. Get three of these to appear anywhere to trigger 12 free spins. Any additional scatters showing up on the reels will grant an extra four free spins. During this feature, the Avalanche Multiplier will not reset itself until the end of the free spins round. Furthermore, when a spin doesn’t form any wins, a wild symbol will appear and remove all other icons vertically and horizontally. 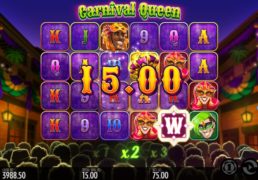 I can’t remember the last time I had such fun playing a carnival-themed game, so there’s definite props to be given to Thunderkick in that respect. Carnival Queen just takes the theme and really integrates it well, incorporating high-quality graphics, intriguing special features and great bet customisation.

There’s no better way to celebrate something than with a carnival. Plus, when there’s a Carnival Queen in town, she’ll make you get up and start dancing. Prepare yourself for the appearance of the Avalanche Feature, Wild and Scatter symbols in this Thunderkick slot.

Hurray! There is a competition going between users of our site!
You have to do nothing, but browse out site, and win a daily prize. Click here to read more.
You current ranking:
Time Left: 3h 5m 6s