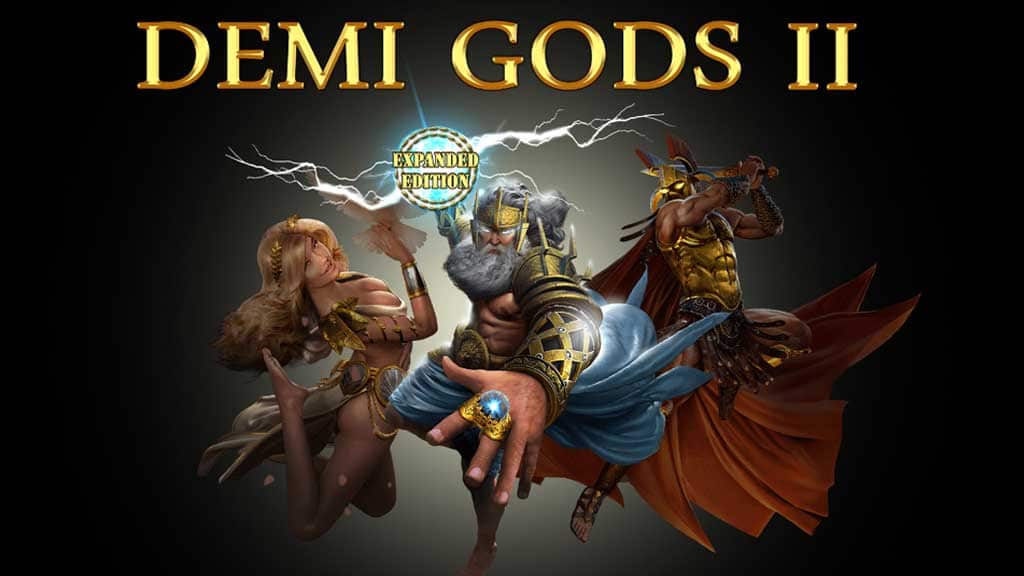 Demi Gods II: Expanded Edition is the upgrade on the original Demi Gods 2 slot, and it has six reels, four free spins features, as well as some additional perks. The theoretical payout and the paytable aren’t that great but the game is really fun to play!

Spinomenal released the Demi Gods II slot game in July 2018, and in March 2019 they released the Expanded Edition which we’re reviewing here. The games are almost identical in terms of theoretical payout, as the original title has 95.00% and this one has 95.10%. I’ve played both games so let me give you an honest review of the Expanded Edition so you can decide if it’s the one you should play or is the original the better choice. 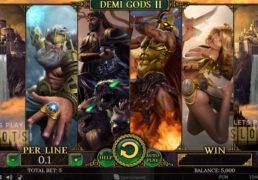 Plain and simple, the Expanded Edition is – expanded. It has six reels instead of five, spins are faster, and once you unlock all four free spins versions you’ll be able to choose which one you want to play! There are so many features in this game that it is indeed among the most fun Greek Gods slots.

The game is played on a 6×3 board with 50 fixed paylines, and you need to pay a minimum of €0.50 to spin the reels. Even the five card symbols will be able to make you a profit if you land at least five-of-a-kind, and it gets much, much better with the five Gods symbols. Not only that they pay well – from 140 to 200 coins for six-of-a-kind – but they’re three rows high, and the graphics are just amazing, the best we’ve ever seen in Greek Gods slots, which says a lot! At random, any win during the base game may be multiplied by x2 or x3 if a multiplier flies across your reels.

There are four free spins game versions, and once you unlock all four you can freely choose which of the four you want to play. The feature is triggered when you land three Scatters, and you’ll need to do that a total of four times before you can choose a feature yourself. Moving Reels will give you a re-spin after each win where the reels move one reel to the right, with a new one revealed on the left. The re-spin may be triggered again if you win again. Moving Wild will have Aphrodite that travels from right to left across your board. Expanding Wild will have Ares as an expanding Wild. Extra Wilds will randomly give you from 4 to 7 extra Wild symbols, and during this version of the feature only low-win symbols will appear on the board.

After you get a taste of each of the four features, you should probably be able to make an educated guess on which is the best one, and you’ll keep choosing that one every time you trigger the free spins and will therefore gain a certain edge over the game.

Theoretical return to player (RTP) is 95.10%, which is neither good nor bad, and most players will be ok with it as long as there’s a chance to win big. The prizes in the paytable aren’t that great on a single winning payline as you can only get 4x your bet, but there are 50 paylines so the maximum prize is 200x your bet, and the Wilds during the free spins feature will help a lot. Still, it’s difficult to make money on this slot game because the maximum win is not very big.

The Expanded Edition of Demi Gods II is definitely an improvement over the original, and is a title that can’t be missed if you enjoy Greek Gods slots. There’s just enough here to keep you interested for hours, primarily the bonus features, and it’s very tempting to trigger the free spins game four times so you can pick which one you want to play afterwards. This is a good slot game and many players will enjoy it.

Demi Gods II: Expanded Edition is the upgrade on the original Demi Gods 2 slot, and it has six reels, four free spins features, as well as some additional perks. The theoretical payout and the paytable aren’t that great but the game is really fun to play!

Hurray! There is a competition going between users of our site!
You have to do nothing, but browse out site, and win a daily prize. Click here to read more.
You current ranking:
Time Left: 1h 19m 52s