Travelling the high seas could mean that you’ll get caught by the beauty and song of a siren. In fact, this Spinomenal game aims to make sure of it, because the Siren’s Treasures slot features wilds, free spins, a bonus round and much more for you to enjoy!

This Spinomenal slot is certain to take you on a journey across the seas, and make sure that you watch out for the siren on the way. Fortunately, if this siren does catch up with you, she’ll grant you nothing but fortune in the slot. Having played Siren’s Treasures for several hours, I can pretty much recommend it as being one of the developer’s best. I’m a big fan of it, and not just for the great graphics that it provides. It’s also got a selection of bonus features to keep you entertained from start to finish. 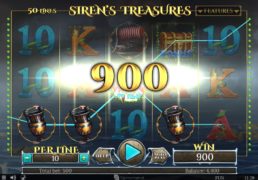 I was happy to see a standard five-reel layout on display in the game, which is accompanied by a total of 45 pay lines. You’re not able to customise these active pay lines, but you do have the option of changing the value of the wager that you place in the game. You’ll be able to choose from bets of between €0.01 and €10 per line, meaning that the maximum bet you can place in the game stands at €500 per spin.

The symbols that appear in this slot are mostly relative to the overall theme, although they start with the regular inclusions of playing card icons. These run from 10 to A and can pay out a maximum of 90 times your overall wager. Then comes the sunken urn, which has a pay-out of 120 times your stake at a maximum. There’s also the shield and the harp. Finally, the longboat acts as the highest paying standard addition, offering rewards of up to 200 times your bet.

The symbol of the siren meanwhile, provides the game with its wild offering. This means that it will substitute for all other standard icons. 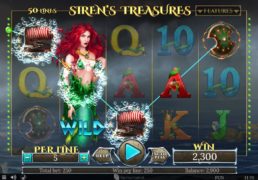 Just to linger on the wild a bit more, I was very much happy to see it appear in stacked format, leading to an expanded wild. This occurs when three wilds show up on top of each other and then a respin takes place right after. These stacked wilds can only appear on reels two and four during base gameplay, although when the respin hits, it can also appear on the third reel.

My favourite part of Siren’s Treasures is the bonus game, which activates whenever three or more scattered bonus treasure chest symbols come into view. This feature round provides you with various sunken treasure chests, with four picks from them to provide you with coin rewards.

There’s also a free spins round in this game, with the sailor acting as the symbol to trigger this. Whenever three or more of these show up in scattered locations, 10 free spins will be given to you and during this round, triple pay-outs are provided.

Finally, on any random spin, a collection of mystery symbols depicted by the close up of the siren’s face may appear. Once the reels stop spinning, they will all uncover one and the same standard icon. 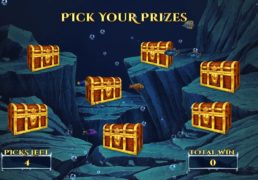 I think that I could play this slot game for hours on end, it’s that good. The graphics within are very visually appealing, the bonus features make it all the more entertaining and it offers up a thoroughly attractive slot on the whole. Spinomenal has certainly added another thrilling game to its collection with this one.

Travelling the high seas could mean that you’ll get caught by the beauty and song of a siren. In fact, this Spinomenal game aims to make sure of it, because the Siren’s Treasures slot features wilds, free spins, a bonus round and much more for you to enjoy!

Hurray! There is a competition going between users of our site!
You have to do nothing, but browse out site, and win a daily prize. Click here to read more.
You current ranking:
Time Left: 5h 22m 57s