Fruit Warp is an innovative Thunderkick slot game that doesn’t have any reels or paylines, but you get nine fruits and need to get five of the same fruit to enter a hugely interesting Fruit Mode! 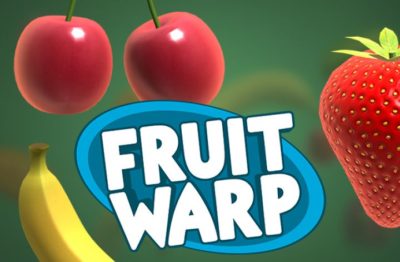 I have played Fruit Warp for a few hours and I’m going to give you my honest opinion about this slot, as well as details about game mechanics. This game is a bit out of the ordinary, as it doesn’t have reels or paylines, but it can be just as rewarding as a normal game, if not even more than that.

Theoretical return to player (RTP) is 97.00%, which is excellent, and is a reason to give this slot a try even if you don’t initially like its setup. This is an innovative game that takes some time to get used to, and after that you’re in for a rewarding medium variance experience. The paytable does offer a chance of a big win, but unlike the vast majority of other slots you can’t get multiple winning paylines, so 216x your bet is the best you can get, period. Dynamic multipliers in the Fruit Mode can multiply that by as much as x20, or even more than that, so this game can definitely issue big wins. The bonus round is triggered often, and overall this is an enjoyable experience that is easy to play and yet can be very rewarding. Quality stuff by Thunderkick. 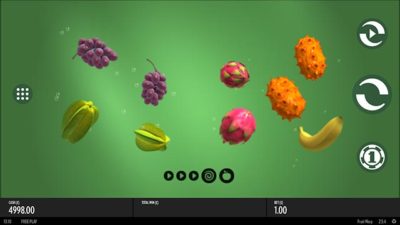 There are no reels and paylines in Fruit Warp, and with each new spin you’ll get nine fruit symbols thrown at you, and it’s enough to get three same fruits to get a win. This would be the equivalent of a 3×3 slot with all possible paylines, 27. In Fruit Warp, you can bet from €0.10 to €100, and the prizes for three-of-a-kind range from 0.1x to 1x your bet, and the maximum prizes, for nine of the same symbol, range from 15x to 216x. There are nine symbols in the paytable, and there are no Wilds and no Scatters. Cherry and Strawberry look alike so it’s difficult to distinguish between the two right away, but the other symbols can be recognized instantly when the nine fruits are thrown your way. You’ll see Plum, Orange, Banana, Grapes and three exotic fruits that are the best-paying symbols in the paytable. The best one really stands out as it pays almost five times better than the next one. 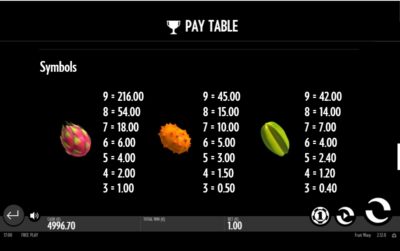 The Fruit Mode is an incredibly interesting bonus game, and when you finally get those five same fruits, the fun starts. You got to keep getting the same symbol that triggered the Fruit Mode, and you need at least one in every spin. Every time you do get that desired symbol, you’ll advance 1 step in the Warp Meter. The milestones in the Meter award multipliers and some extra lives, and these help you a lot. Dynamic multipliers apply to all wins from that point on, and the final milestone may be x20 or better. This bonus round is very interesting and it can be very rewarding, and also, it is triggered more often than a traditional free spins game with three triggering Scatters.

Fruit Warp is one of the more interesting slots out there, and one of the best Thunderkick titles, but you need to play it for a while to understand the game mechanics. Once you do, you’re in for hours of fun, especially during the Fruit Mode. Add a theoretical payout of 97% and you got a really, really good slot game.

Fruit Warp is an innovative Thunderkick slot game that doesn’t have any reels or paylines, but you get nine fruits and need to get five of the same fruit to enter a hugely interesting Fruit Mode!

Hurray! There is a competition going between users of our site!
You have to do nothing, but browse out site, and win a daily prize. Click here to read more.
You current ranking:
Time Left: 2h 24m 45s
Gambling is for 18+ though some countries may have other restrictions...Remember you should always Gamble Responsibly
We use cookies to ensure that we give you the best experience on our website. If you continue to use this site you agree to allow us to use cookies, in accordance with our Terms & Conditions.Agree & Close