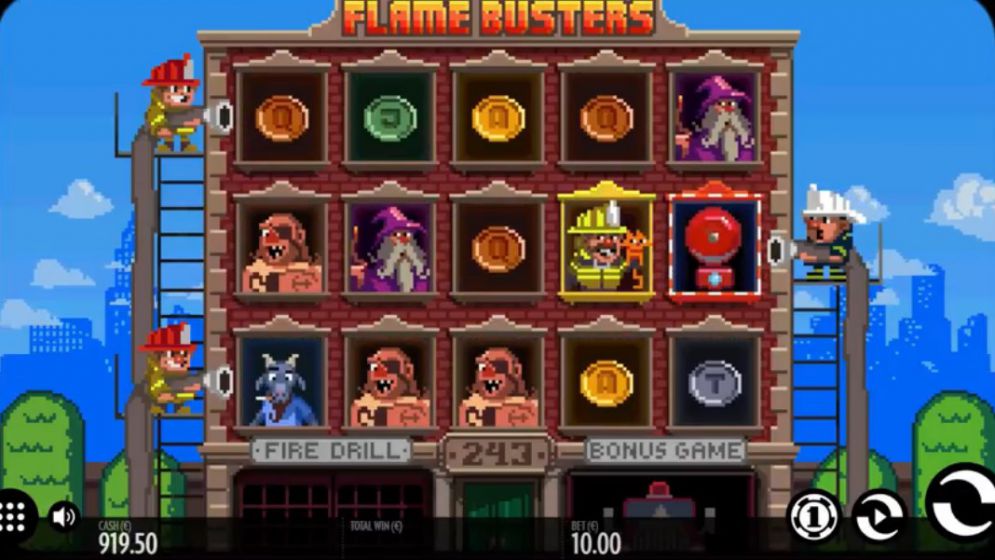 Flame Busters is a retro gaming themed slot machine by Thunderkick, it offers innovative gameplay and a free spins game in which you climb five levels! 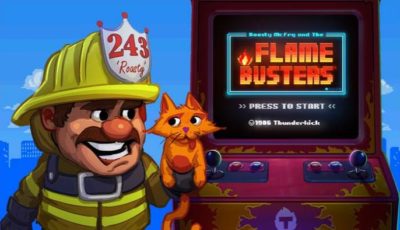 The full name of the game is Roasty McFry and the Flame Busters, it was released in mid 2017 by Thunderkick, and I have played it ever since because I like the theme and the innovative gameplay. But let me give you an unbiased opinion on this slot’s pros and cons.

Theoretical return to player is 96.20%, which is a common value in online slots, and variance seems to be medium. The game pays often but not that well during the main game but it gets much better during the free spins game as low-value symbols disappear from the reel strips. Win frequency is around 30%.

The game has innovative graphics as the theme is drawn entirely in the style of 1980s computer games, and some players won’t like it. I personally do, though I agree it takes some time to get used to the graphics and to accept it was intentionally done like that and not in high resolution. 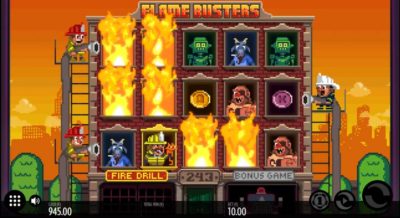 The game is a standard one, it’s played on a 5×3 board with 243 ways to win, and the game can be played for already €0.10 per spin. There are ten paying symbols in the game, and five of them are low-value coins while the five are characters that imitate those from old computer games, and they pay well. The difference between the best and worst symbol isn’t that great, so all symbols have at least some value. Fire symbol can be replaced by any other normal symbol, and all Fire symbols on the board will always turn into the same symbol. While this may seem like yet another standard slot game, the bonus features make Flame Busters a unique experience that will make you feel as if you’re playing a 1980s computer game!

Fire Drill special feature gets triggered randomly in the main game, and it will transform some low-value symbols into one same symbol. One to five symbols may be chosen to be replaced by the Fire symbol,  and all Fire symbols will then transform into the same random symbol. This won’t be necessarily very rewarding, but it’s fun and can bring some extra small cash to help keep you going. It’s also fun to watch this play out on your reels, and the board feels like there’s always something going on. 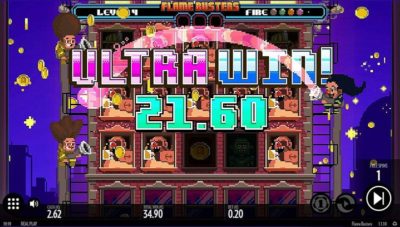 The real bonus feature of the game is the free spins game, where you’ll get 10, 15 or 20 free spins for three, four or five Fire Alarm Scatters. And Thunderkick delivers as they’ve managed to design a computer game inside a slot machine.

During your free spins feature, you’ll be collecting each Scatter that lands on your reels, and when you collect three of them you’ll advance to the next level and will also get +2 extra free spins. Also, the lowest-paying coin will turn into a Fire symbol for the remainder of the feature. There are a total of five levels, or floors, and if you reach the final one you’ll have a nice selection of high-win symbols on your board and low-value coins won’t be there. This feature is very fun to play, and it can be quite rewarding, too, especially if you’re lucky enough to get 15 or 20 free spins, since it’s very difficult to reach the top level if you start with 10 spins only. You might get there sometimes, but not very often.

Flame Busters is a special slot game which everyone should play at least once. It’s a superb innovative slot that will provide lots of fun during the free spins game with five levels, so it’s definitely recommended. It is not a slot you’ll be playing for a long time or several days in a row as the graphics can only be tolerated for so long, but this is one of those games that blur the line between slots and computer games, and is one of the best of its kind. Do try to look beyond the pixelated graphics.

Flame Busters is a retro gaming themed slot machine by Thunderkick, it offers innovative gameplay and a free spins game in which you climb five levels!

Hurray! There is a competition going between users of our site!
You have to do nothing, but browse out site, and win a daily prize. Click here to read more.
You current ranking:
Time Left: 14h 14m 50s