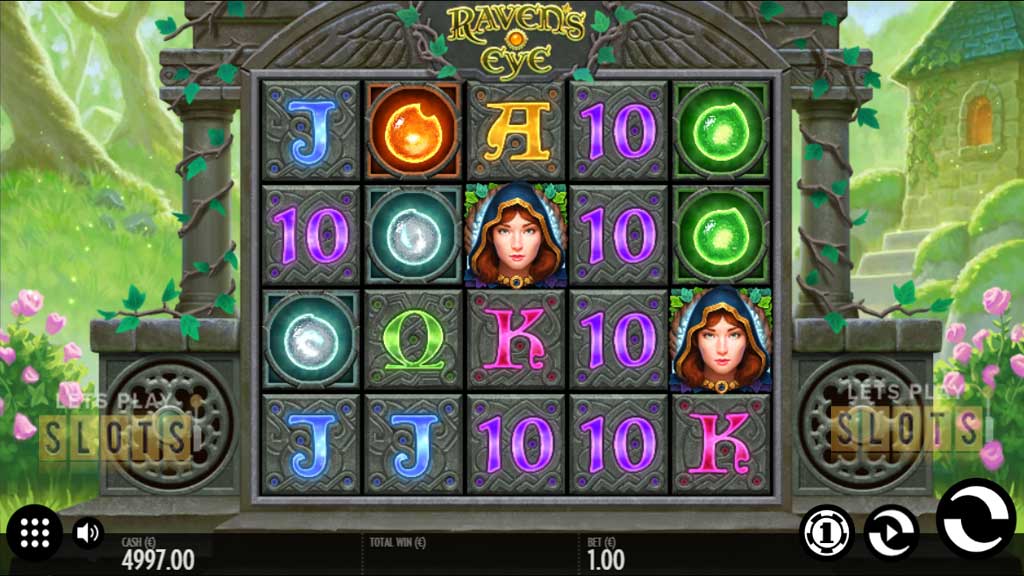 Raven’s Eye is a Thunderkick slot with a fantasy theme, mystery symbols and a bonus round in which you collect Orbs to make more symbols mystery ones. The game has high variance and it was released in June 2019.

The game is played on a 5×4 board with 30 fixed paylines, which is a bit less than you normally get on such a large board, and the bet values don’t match the number of paylines as the minimum bet per spin is €0.10 and the maximum is €100. It’s easy to select the bet as there are 14 preset bet sizes and no coins or bet levels to worry about. When you’re happy with your bet simply click Spin or Autoplay. 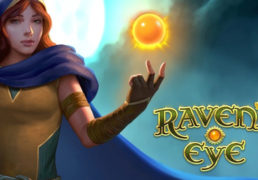 The game has five card symbols which don’t pay much, as usual, and the best thing you can hope for is to get your stake back, unless you landed a multi-payline win. Four more symbols pay roughly twice as much so they’re the medium-value symbols, and Sorceress and Wild are the two best-paying symbols in the game. They’ll pay 12.5x your bet for five-of-a-kind but only 2x your bet for four-of-a-kind. There’s no way to make money in Raven’s Eye unless you land five-of-a-kind wins or huge multi-payline wins. 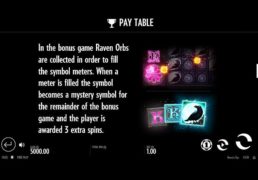 In the bonus game Raven Orbs are collected in order to fill the symbol meters. Whenever a meter of a certain symbol is filled all the way, then that symbol will become another mystery symbol for the remainder of the feature, and you’ll get 3 extra spins. Of course, the trick here is that if you have several mystery symbols, they will all become the same symbol in the end, allowing you to form huge winning paylines. It’s difficult to get those mystery symbols though, so the free spins game has high variance, just like the entire game does.

Theoretical return to player (RTP) of Raven’s Eye is 96.10%, which is decent, and the reason to play this game would be its bonus round that has the potential to deliver big wins. The game has somewhat high variance as it doesn’t pay often and you need the reels to align just right if you want to get any kind of big win – the game is a bit tight. However, the symbols are often stacked, which may lead to a full board win every now and then, and the best one available in the game would be worth 375x your total bet.

Raven’s Eye isn’t easy to play as the game is tight most of the time, and it’s up to each player to decide if the potential to win big is worth it or not. The game can pay well every now and then, mostly during the free spins game where your chances of landing a big multi-payline win or even a full board win increase greatly because you got a chance to have multiple mystery symbols. Variance is high in this game, but that’s what most players like anyway. Find Raven’s Eye in a casino that features Thunderkick slots and play it for real money.

Raven’s Eye is a Thunderkick slot with a fantasy theme, mystery symbols and a bonus round in which you collect Orbs to make more symbols mystery ones. The game has high variance and it was released in June 2019.

Hurray! There is a competition going between users of our site!
You have to do nothing, but browse out site, and win a daily prize. Click here to read more.
You current ranking:
Time Left: 10h 24m 12s