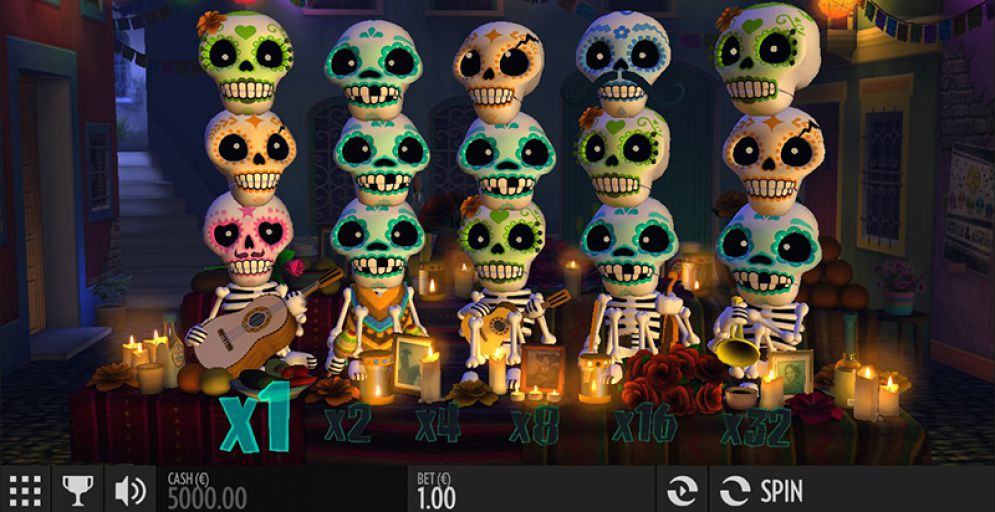 Esqueleto Explosivo is a Thunderkick slot game with only five symbols, but the ones that form a win disappear and award a re-spin with up to a x32 win multiplier! 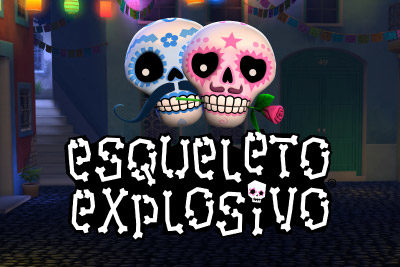 I’m going to give my honest opinion of Esqueleto Explosivo slot machine by Thunderkick after having played it for a few hours. The slot game is themed around dead mariachis, and uses 17 fixed paylines. As a matter of fact, it’s the same as a 20 payline slot machine except that 3 paylines have been removed. The minimum price you’ll pay to play these 17 paylines is €0.10 and the maximum is €100.

Theoretical return to player (RTP) is 96.00%, good enough, but the game felt to me like it has high variance because the win frequency isn’t very high. Most spins will be non-winning ones, and only the re-spins feature, helped by the Explosivo Wild, can help things get rolling. The best you can hope for is a win between 0.70x your bet to 2.50x your bet for five-of-a-kind, which means the paytable is very poor and that there is no incredible win to win here either, at least not without the x32 win multiplier to help the skinny paytable. That’s not a good combination – a slot game that pays minimal wins and does even that rarely, yet there’s no really big win to look forward to. 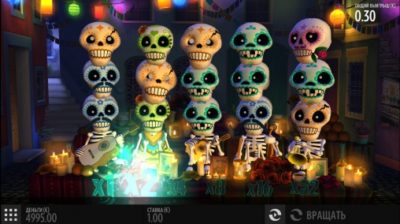 The game is played on a 5×3 board though the symbols all fall down from above instead of the reels spinning. This is a falling blocks game in which the winning symbols will explode, hence the title, and will be replaced by new ones that fall from above. This is effectively a re-spin, and with each consecutive win during those re-spins the win multiplier for the next re-spin will increase. The first spin doesn’t have a multiplier, the second spin has an x2 multiplier, and then it goes on with x4, x8 and x16 before reaching the maximum x32 Mucho Multiplier after the fifth consecutive re-spin. This can, of course, be very rewarding. Explosivo Wild helps with this as whenever it lands on the reels, it will blow up 8 surrounding symbols and will award a new re-spin.

Esqueleto Explosivo uses only five symbols, one for each Mariachi, and the differences between them when it comes to coin wins aren’t very profound, therefore all the symbols are valuable and will be forming nice wins. Graphics of the game are amazing on one hand, and poor regarding the look of the symbols. They are all almost the same and are drawn in soft pastel colors, which makes it even more difficult to distinguish from one another. It’s almost impossible for a new player to read the reels and notice a winning payline. It’s just a bunch of Skulls that look the same. Other than that, graphics are of high quality and it’s obvious throughout the game. 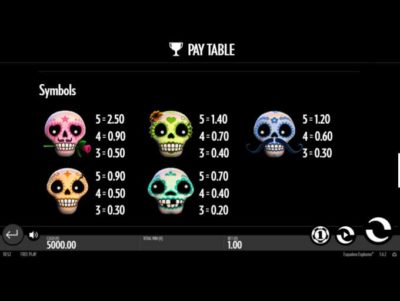 Other than the falling blocks game mechanics, Esqueleto Explosivo doesn’t have a bonus round. This makes the selection of symbols and their artwork by Thunderkick even more boring, as you constantly only look at five similar Skulls with soft color, and there’s no break from this as it’s all you’ll ever get. I found the game to be very repetitive, and it would have benefited from a free spins game which it doesn’t have.

Esqueleto Explosivo is a slot machine for specific tastes, as some players will like it and some will not because of its several shortcomings. But if judged for gameplay alone, it’s not bad and offers a falling blocks experience with only five symbols and win multipliers of up to x32. That will make it popular among fans of falling blocks games. If you’re not sure what to think about this slot, go ahead and try it yourself. You’ll either love it or hate it.

Esqueleto Explosivo is a Thunderkick slot game with only five symbols, but the ones that form a win disappear and award a re-spin with up to a x32 win multiplier!

Hurray! There is a competition going between users of our site!
You have to do nothing, but browse out site, and win a daily prize. Click here to read more.
You current ranking:
Time Left: 2h 57m 4s