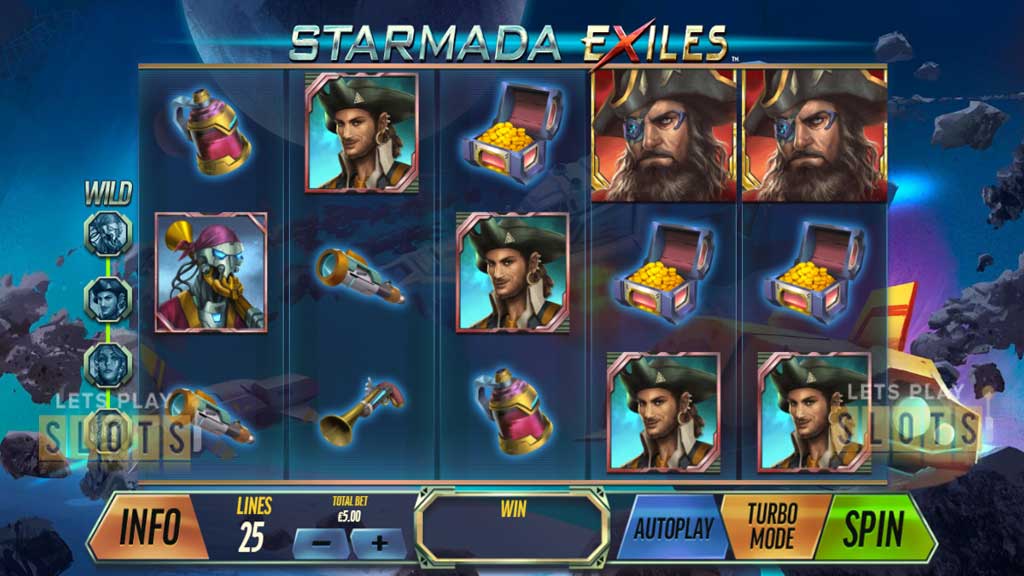 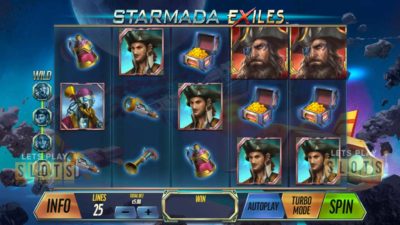 Playtech has decided to come out with an interesting theme in its new ‘Starmada Exiles‘ slot. The game lets players turn into space pirates and go on an interesting space adventure. Players are greeted by the vision of outer space with space ships and meteoroids in the background.

The music is also very apt in getting players to relax and let their imagination take over. Overall, the initial impression of this new slot is very positive and players should enjoy the full package.

The game features five reels and 25 paylines. The goal of the game is to hunt for space pirate treasure and this is done by getting winning combinations.

Low-value symbols for the game are the various gadgets and weapons that the pirates use. For players who want a higher pay out, they can get one of four exile characters: the Pirate Captain, Female Pirate, Male Pirate and Robot Pirate.

The most valuable one among the set is the captain. If a player gets five on a payline, they will get 60 times their stake. There is also a wild symbol that helps with getting those winning combinations. It appears on all the reels except for reel one.

The most special symbol in the game is the planet. It acts as the scatter symbol and upgrades the game by activating the bonus feature. This happens when it appears on reels one and three.

For the bonus, players have to select one of the two symbols. The first choice will give players a cash prize while the second choice will upgrade one of the four exile symbols. The result is all of those symbols will become wilds during the free spins feature of the game. Besides that, the scatter symbols become emerald scatters. This means that they automatically become cash prizes when scored in the future.

Players should try Starmada Exiles when it hits their favourite online casinos.

Hurray! There is a competition going between users of our site!
You have to do nothing, but browse out site, and win a daily prize. Click here to read more.
You current ranking:
Time Left: 6h 1m 45s