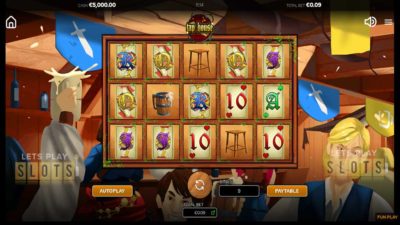 Slot developers are always experimenting with new teams in a bid to capture the attention of slot players. Arcadem takes players to the 18th century with its latest slot released called “Tap House“. Players are taken to an 18th century tavern which is full of dangerous outlaws and a perfect place for a drink before going on the road again.

The game presents players with five reels and three rows for its play grid. Nine fixed paylines are there for players to win on. The low number of paylines is worrying combined with the lower-than-average RTP of 94.43 percent.

The betting range is also not very impressive but will be perfect for new players and those with a limited bankroll.

Players start their bets at $0.09. This is pretty low and good for starters. However, the game has a maximum wager of $18. That is very low compared to other games that allow for bets that go all the way up to three figures. High rollers will avoid this game because of this.

The game has a nice spread of symbols though. It begins with the card royals. With these, players can get a maximum of 20x their bet if they score five of one symbol. The more thematic symbols include all of the usual items that are found in a tavern. These include patrons, pints, barmaids, and stools. The most valuable of the bunch can pay 100x the player’s bet if five of it is scored.

The game gets better when the special features come in. There is a Wild symbol. It acts as other regular symbols when scoring. Players will have a better chance of winning with its appearance. Additionally, players can score five of them on their own. This gives players 300x their bet. The game also has a scatter symbol in the form of the tavern logo. It is used to activate the game’s special feature.

When players land a scatter symbol on the first, third, and fifth reels, the free spins feature will be triggered. The chances of this happening are pretty good because if there are two scatters already in place, players get a respin to try and get a third scatter symbol.

When players do activate the free spins, the game changes the grid into a more traditional slot form of three reels and one payline. Players then get 10 free spins.

The Arcadem’s Tap House is a great slot for new players. Go ahead and give it a few spins today.

Hurray! There is a competition going between users of our site!
You have to do nothing, but browse out site, and win a daily prize. Click here to read more.
You current ranking:
Time Left: 2h 29m 53s