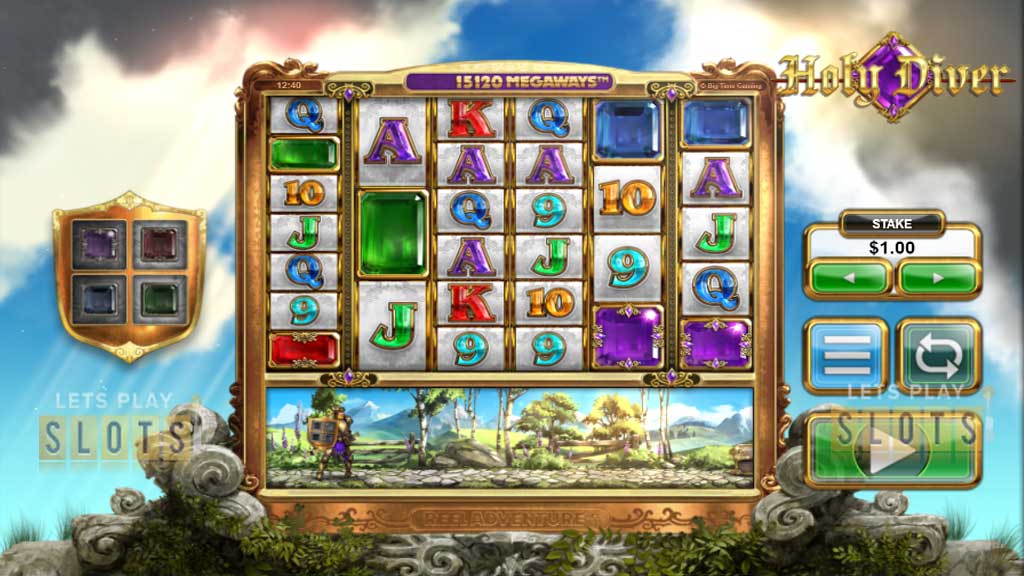 Black Sabbath fans will most likely be familiar with the band Dio and its debut album called ‘Holy Diver’. This vocalist on this record was Ronnie James Dio who left Black Sabbath to launch his new band and début record back in 1983.

Big Time Gaming for some reason decided that it was time to revive the Holy Diver theme and bring it under its popular Megaways banner of themed slots.

As medieval adventurers, players seek to win treasure and fame as they explore the lands in this six reel slot game which offers them 15,120 ways to win.

When players start the game, they are met with great graphics and stirring music.

Players will notice that the lower-value symbols are the traditional card symbols that are used in most slot games. Higher value symbols are the four gemstones, with the purple gems being the most valuable. It gives out 15 times the original stake if six of them are part of a winning combination.

The real star of the game is the adventure happening below the reels. Every time a player spins the reels, the adventurer advances a random distance. There are chests on the way and when he encounters them, players get bonuses.

First, there is the Standard Symbol Bonus. One of the lower value symbols is picked and turned into a wild. If this results in a higher payout, players will receive it. Next, there is the Sword Bonus. Players will randomly see up to three reels turn into wilds. They can also receive multipliers of up to 7 times their stake and they have the option to stack. The max multiplier for a singles spin can reach to 342 times the original stake.

The third feature is the Fireball Bonus. Players can get four flaming wilds added to the reels. When these come in, they explode and turn adjacent symbols wild as well. Finally, the Gem Symbol Bonus can turn gemstone symbols into wilds.

There is also a big bonus game feature. Players collect gems while they play and once they have maxed out all four gems, the bonus feature is activated. Players are then given a chance to activate the bonus game and get free spins. Players will get ten free spins and the music changes to Dio’s Holy Diver hit song.

During the bonus game, players will have higher multipliers and the knight will be fighting evil in his adventures during these spins and gets rewarded. If he gets diamonds, more free spins will be given.

Overall, this slot game is a visual and audio treat. Players should try this out for a fun time and some cool winnings.

Hurray! There is a competition going between users of our site!
You have to do nothing, but browse out site, and win a daily prize. Click here to read more.
You current ranking:
Time Left: 14h 36m 54s
Gambling is for 18+ though some countries may have other restrictions...Remember you should always Gamble Responsibly
We use cookies to ensure that we give you the best experience on our website. If you continue to use this site you agree to allow us to use cookies, in accordance with our Terms & Conditions.Agree & Close