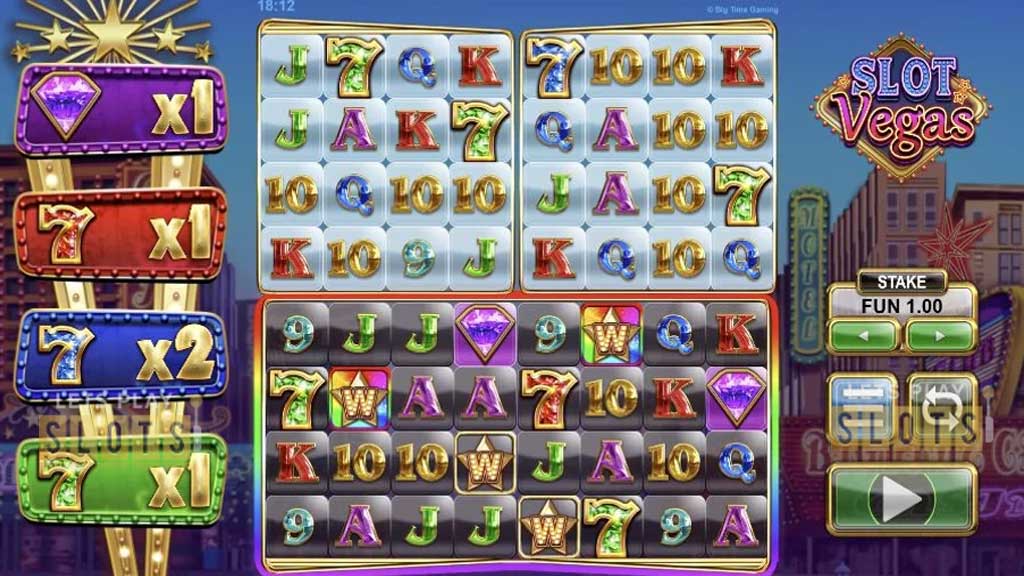 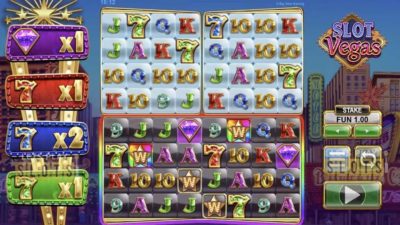 Gaming developers are never tired of using Las Vegas as the main theme for their games. The latest developer to come out with a Las Vegas themed slot is Big Time Gaming. Their newest release is titled “Slot Vegas Megaquads“.

Players will see four grids when they start the game, each with four reels and four rows. All of them have 256 ways to win. When all of the special features line up though, players will have an incredible 16,777,216 ways to win.

Betting starts with 20 cents per spin and goes up to $20. This comes across as a low amount but players are betting across four grids so it can get big. Additionally, the volatility of the game is pretty high. The game’s RTP is at 96.59 percent.

The symbols in play are a bit boring. There are the card royals. Then there are three seven symbols of different colors as the premium symbols. Finally, there is the diamond that acts as the game’s scatter. There is also the Rainbow Wild symbol.

Players will be happy with the special features. The game is full of them and players will love each of them. The most noticeable one is the Symbol Multiplier feature. Every time a premium icon is scored, the multiplier for that symbol goes up by one. When a player then lands a combo of four premium icons, the multiplier is applied. This can mean big wins, if players are lucky enough.

Rainbow Wilds are more than just substitutes for common symbols. While they appear on all reel sets, in reels two and three, they can also trigger a big bonus. When two reel sets see Rainbow Wilds appear and they are beside each other, they will merge into one reel set so that players can have 65,536 win ways. This is the Rainbow Wild bonus.

Players will also get free spins. This happens when four scatter symbols appear and something massive happens. Players will see their multipliers added up so that it becomes one big multiplier. Additionally, a new grid appears with a 4×8 setup. Players who get the Rainbow Wild bonus on these grids will create an 8×8 grid that has 16,777,216 ways to win.

If you like big bonuses, do give Slot Vegas Megaquads a few spins.

Hurray! There is a competition going between users of our site!
You have to do nothing, but browse out site, and win a daily prize. Click here to read more.
You current ranking:
Time Left: 8h 37m 31s