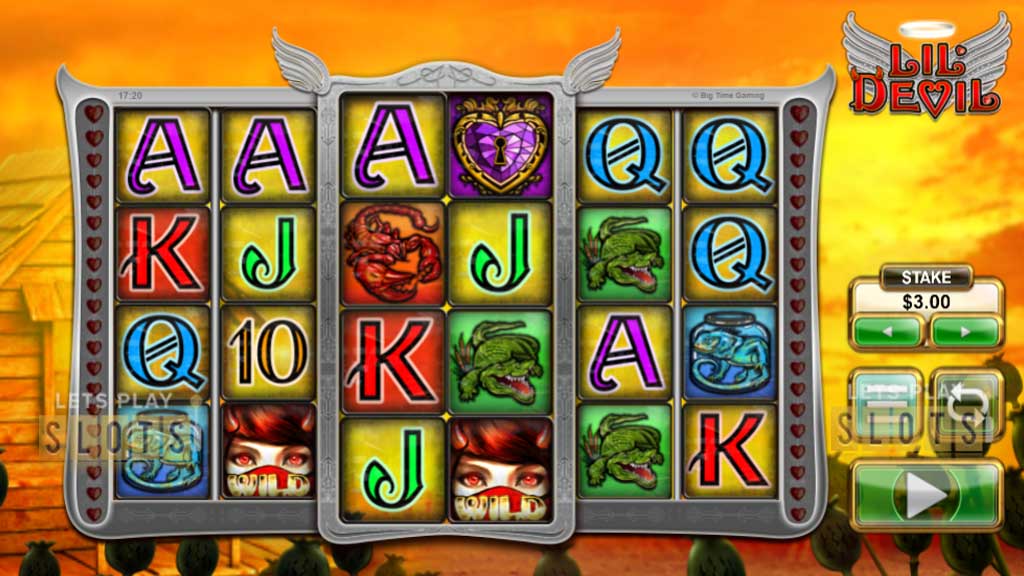 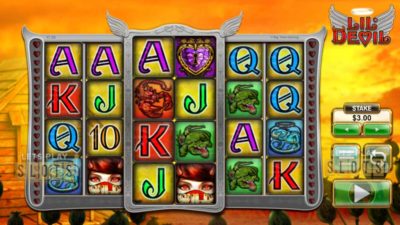 Big Time Gaming is bringing an interesting new slot called “Lil’ Devil” to the market. Players will be the target of temptation as an angel and devil compete to offer them the best chances of winning. This game is based on the song from The Cult called “Lil’ Devil“. The graphics are not exactly top notch and the visual theme is a bit too yellowish-orange. However, the game is still pretty good overall and does provide a nice distraction.

Players will be playing on six reels with 4,096 ways to win. The will be need to come up with combinations of symbols to come out on the winning side. The lower value symbols are the A, K, Q, J, 10 and 9 card suits but the more valuable symbols include crocodiles, reptiles in jars, scorpions and purple hearts with locks.

The purple hearts are the most valuable of all symbols. Players who get six of them in their combination will get ten times their stake. Winning combinations need to start from the first reel though. There are two types of wilds available. The devil wilds appear on reels 2,3,4, and five. Angel wilds appear on reels three and four. They substitute for all symbols except for scatters.

The special feature of the game involves the scatter symbol. It is the house symbol. Players only need to get two to trigger it. For two scatters, players will have the Lil’ Devil song play along with a heart. Players trigger the free spins by scoring at least three scatters. They also give out up to 100 times the player’s stake.

The Be My Angel Free Spins feature awards seven free spins with one symbol being a sticky wild. Additionally, players who get four stick wilds on a reel, will get three extra free spins. The other option is the Dynamite Lover Free Spins feature. Players get 12 free spins and a chance at continuous wins as winning combinations are removed and new symbols are added.

Overall, this game may not look that great but it does have explosive gameplay and will give you a fun time!

Hurray! There is a competition going between users of our site!
You have to do nothing, but browse out site, and win a daily prize. Click here to read more.
You current ranking:
Time Left: 22h 11m 51s