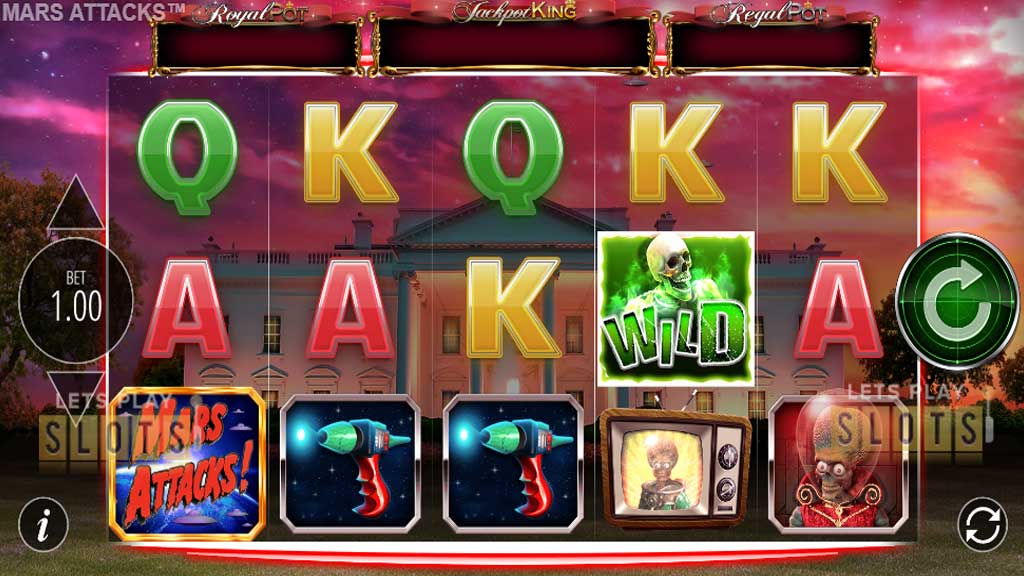 Blueprint Gaming has decided to develop a themed slot based on a popular sci-fi movie called Mars Attacks and has also titled the new slot with the same name.

Mars Attacks is a horror-comedy movie that came out in the 90s and was quite popular with a niche audience.

Blueprint Gaming decided to build a slot around this theme and has come up with a five reel slot game which has 20 pay lines to help players fight off the alien invaders.

The first thing that players will notice with this game is that it has excellent visuals and audio. The developers have done a great job in bringing the theme of the movie to life. The bug-eyed Martian invaders are present in all their glory and the background image of the White House burning stands out.

In the game, players are trying to fight off the alien invasion by scoring winning combinations. There are the basic card symbols that pay only low amounts, but there are also fancier symbols that allow players to win big. This includes ray guns, Martians, and the Mars Attacks logo. The last one is the most valuable symbol, paying out 25 times the original stake when a player gets five of them on a pay line.

Beat Back The Invaders

One of the more interesting features of the game is the fact that it activates modifiers randomly. Every spin has a chance of activating one of five modifiers that can make a game special. This includes the Radiation Blaster feature, that randomly adds wilds to the reels, and the Mega Shrink Ray feature, which technically adds two more rows, giving players more pay lines.

Additional modifiers are the Abduction Beam feature that replaces symbols, the Expansion Cannon feature that randomly allows a symbol to spread out, and the Sub-Zero Laser feature which allows winning symbols to remain in place for future spins.

These are some cool features but it gets even more enjoyable when the bonus game is activated. Players get this by scoring three or more bonus symbols. Which bonus game to play is based on the choice of the player. The Spy Hunter feature is technically a memory game, while the We Come in Peace feature is a balancing game. The DNA Analysis, Martian Takeover, and Final Stand feature are all variants of the normal game but with exciting changes and free spins.

If those bonus games are not enough, the game is also part of the Jackpot Kings network. Progressive jackpot games allow players a chance to win big and Jackpot Kings gives players a shot at 15 jackpots.

Listen In On The “Carol Of The Elves” This Christmas

Join The Adventures Of The “Red Mantis” With R. Franco Games

Hurray! There is a competition going between users of our site!
You have to do nothing, but browse out site, and win a daily prize. Click here to read more.
You current ranking:
Time Left: 16h 34m 52s
Gambling is for 18+ though some countries may have other restrictions...Remember you should always Gamble Responsibly
We use cookies to ensure that we give you the best experience on our website. If you continue to use this site you agree to allow us to use cookies, in accordance with our Terms & Conditions.Agree & Close