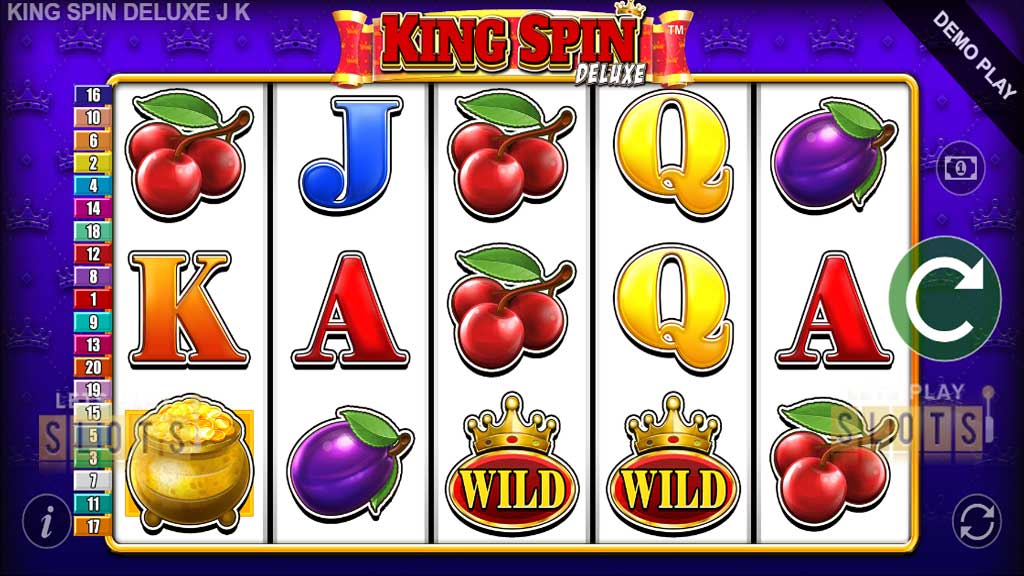 Slot developers have tried hard in recent times to add unique themes, special features and innovations to their games to make it more appealing to players.

However, one of the drawbacks of these innovative slot games is that many players find it hard to understand and difficult to play.

This is one of the reasons why Blueprint Gaming decided to come out with its New King Spin Deluxe slot and keep it simple. This latest slot game is very similar to a basic fruit machine slot with just extra trimmings. For those who want a return to simplicity, this game is it.

Played on a simple purple background, this game looks like one of the many slot machines you are bound to find on a casino floor. King Spin Deluxe features five reels and 20 paylines and slot lovers should have no problems in figuring out how it works. The white reels have all the basic symbols of the game.

The least valuable symbols in this game are the cherries and plums. The biggest amount they can award is double a player’s stake. Next come the J and Q symbols. These can give out triple a player’s stake. The K symbol is a bit more valuable. Players who get five of it on a payline receive five times their original stake. The A symbol rewards 10 times the stake as its biggest prize.

The most valuable symbol though is the pot of gold. Players get 25 times their stake on this one. Additionally, the wild can appear. Though it does not give rewards on its own, it can act as any symbol in any winning combination.

There is a random chance during any spin that the reels can show up as gold and trigger the King Spin Deluxe feature. This gives players a chance to spin a wheel and receive the bonus noted on the wheel. The possible prizes include 500x multipliers that can make any win feel like a jackpot. Players will keep on spinning on the wheel until it lands on the Stop symbol. This can potentially give players 2,500 times their stake.

Another interesting fact about the game is that it is part of the Jackpot King network. This gives people a chance to get a massive jackpot prize if they are lucky enough. Triggered randomly, players are asked to collect crowns to win a prize. They are then asked to pick from the King’s treasure and will then be given a chance to spin the jackpot wheel. This can potentially result in a big payout for players.

Overall, this game is for those who want simplicity in their slot play and have a crack at walking away with a big payout.

Hurray! There is a competition going between users of our site!
You have to do nothing, but browse out site, and win a daily prize. Click here to read more.
You current ranking:
Time Left: 10h 15m 55s