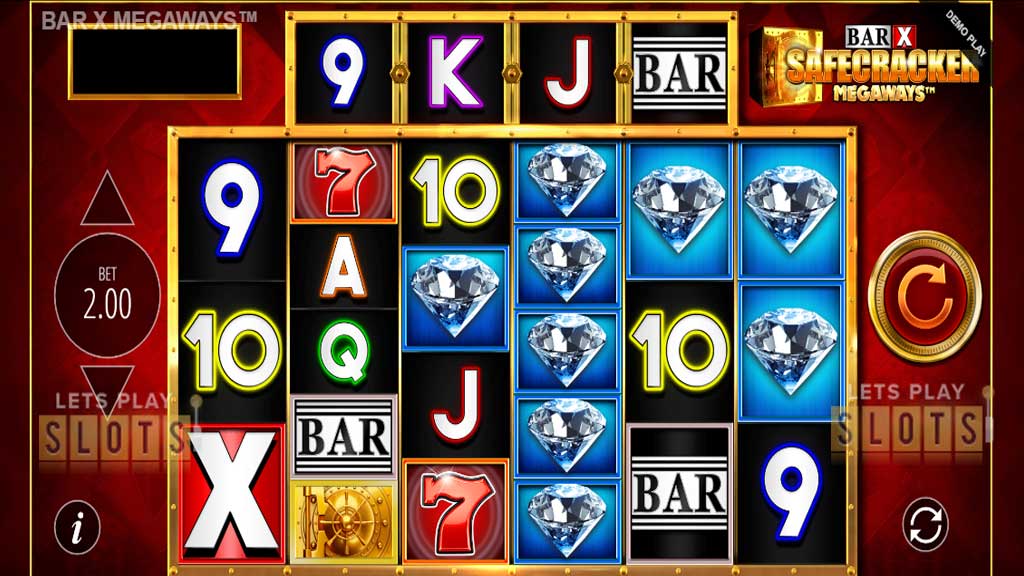 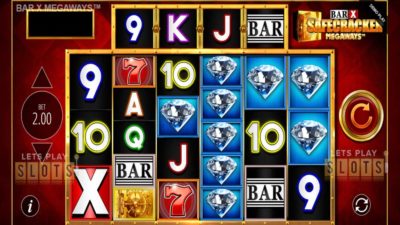 Blueprint Gaming has been churning out MegaWays games for quite some time now.

The quick release of these games has flooded the market with a bit too many MegaWays games in a short period of time and also left the developer struggling to come out with unique themes.

This is evident in their latest offering “Bar-X Safecracker“. It is just a rehash of some of the old traditional slot games out there and there is no a lot of interesting things to be found here.

However, if you are looking for a steady game to play, you can try this one out.

Players start off the game with a simple red background. This is reminiscent of classic slot machines. The main difference is that the game has six reels and up to 117,649 ways to win. The symbols are a mix of card symbols that include the A, K, Q, J, 10 and 9 card suits along with the old slot machine symbols of Xs, bars, lucky red 7s, and diamonds.

The most rewarding of the bunch are the diamonds. If players get six of these in a winning combination, they will get 50 times their stake. Players should also watch out for the wild symbol, which replaces all the symbols except for the scatter. It only appears on the positions above reels 2, 3, 4 and 5.

The reels have varying number of symbols appearing. This is thanks to the MegaWays engine by Big Time Gaming. Players have a chance to add more symbols to the reels as the game develops. If players get the maximum symbols per reel, which is seven, they will have 117,649 MegaWays to win.

The game does have some special features. The first one is the Cascading Symbols feature. When a player scores a winning combination, the winning symbols are removed from the reels. New symbols then drop down. There is a good chance that these cascades can result in more wins. Players should be on the lookout for a Mystery Symbol, which reveal a random symbol for greater chances of winning.

The second special feature is the Free Spins feature. The safe symbol is the scatter for this game and if players score four of it, they have a chance at getting free spins. Eight gold safes are presented and whichever safe the player picks decides how many free spins they get.

During these free spins, there is a chance to trigger the Unlimited Win Multiplier feature. This happens when a player scores a winning combination. Every time they win, their win multiplier goes up by one. Players can get an unlimited amount of multipliers. Besides this, players can get more free spins by scoring either three or four scatters. This will reward them with five or ten free spins respectively. Lucky players can have this go on forever.

Overall, this game is a pretty basic slot game and should be good for a spin or two.

Hurray! There is a competition going between users of our site!
You have to do nothing, but browse out site, and win a daily prize. Click here to read more.
You current ranking:
Time Left: 3h 40m 38s
Gambling is for 18+ though some countries may have other restrictions...Remember you should always Gamble Responsibly
We use cookies to ensure that we give you the best experience on our website. If you continue to use this site you agree to allow us to use cookies, in accordance with our Terms & Conditions.Agree & Close