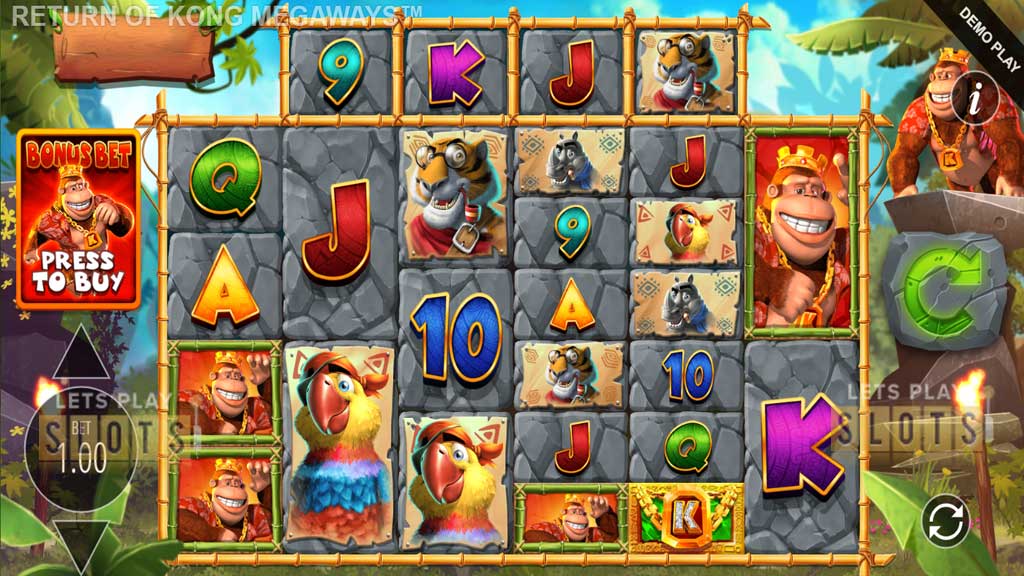 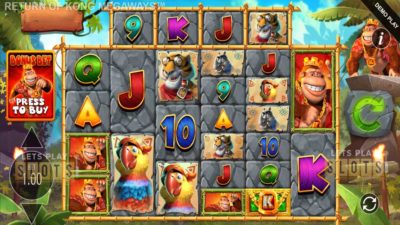 If you are familiar with Blueprint Gaming’s slot games, you should be able to recognise the main character in its latest slot ‘Return of Kong MegaWays’.

Blueprint Gaming has decided to bring back its fun-loving gorilla which has featured in other slots and give him his own new slot game where he is the main star.

This game is pretty much all about having fun and it reflects in the tone and style of the game. The game incorporates colours and a theme that is all colourful and cartoony.

The new slot presents six reels and 117,649 ways to win. Kong, the King of the Wild, is perched to the right of the reels and he’ll be watching players spin the reels.

The game has the usual set of symbols. There are low-value symbols like A, K, Q, J, 10 and 9 royals. Players will be interested in getting the more valuable symbols which include toucans, tigers, rhinos and Kong himself. The big gorilla also acts as the game’s most valuable symbol. If six of the Kong symbols line up on a payline, the winning player gets 50 times their stake. There is also a wild symbol that replaces all symbols except the scatter.

KONG Has Something Special To Offer

This game has a few special features that add a lot of fun to the game. First, there is the Mystery Kong feature. This can be randomly triggered on any spin. Kong can just suddenly throw a golden barrel at the reels. The symbol and all of its other matches are transformed into a randomly chosen symbol. This can potentially allow players to win big.

Players who score winning combinations will see the combos removed and new symbols drop down. New wins can be scored from the symbols that drop down and this continues until no wins are scored. For every winning cascade, players get an increasing multiplier – which has no limits.

The game also features a special scatter symbol. These are necklaces that spell out the name “KONG” Players will trigger the Free Spins feature if it is ever spelled out. Players are then awarded 12 free spins. If there are additional scatters visible, they get five extra free spins. Besides this, Kong will be throwing his barrel during every free spin.

During the free spins, Golden Monkey symbols will start appearing. Players who collect three Golden Monkeys will get two more free spins and add to the number of MegaWays. Overall, the Return of Kong is a pretty great game and is worth spending the time to play.

Hurray! There is a competition going between users of our site!
You have to do nothing, but browse out site, and win a daily prize. Click here to read more.
You current ranking:
Time Left: 1h 53m 48s