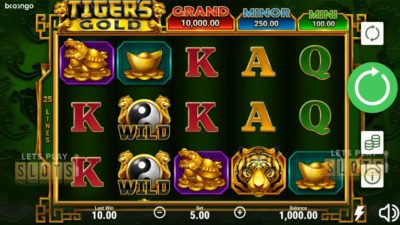 China is a land that has many legends and myths. Some of them revolve around mystical creatures and the riches they hide. Boongo has decided to use one of these myths as the basis of their new game. Players will be trying to outsmart the legendary mountain tiger and claim its treasure without risking their lives in the new “Tigers Gold: Hold and Win” slot.

Players are taken to a dark bamboo forest to hunt down some of the treasures of the tiger of the mountains. The reels are immediately obvious, with five rows and three columns. The game has 25 paylines for players to take their chances with. The game is optimised for mobile play so the screen looms large even if the game is played on a phone.

The symbols of the game should be familiar to most players. For the low-value symbols, players will know the A to J royals. They will want to skip those for the more lucrative symbols in the game. These are the various cultural treasures from China. The most valuable of them is the tiger itself, which awards ten times a player’s stake if they score five of them. The other treasures are valuable on their own. These include a golden ingot, golden turtles and fish.

The game also has a wild symbol. It comes in the form of a pearl that looks like the Yin-Yang symbol. It substitutes for all other symbols except for the scatter, which is a blue vase. The game also has a special golden coin that will trigger the Bonus game if six of it appears on the screen.

Players will want a chance at some of these bonuses. The first obvious one is the free spins feature. This happens when three blue vases appear on the reels. They will appear in the middle reels and will award eight free spins. This is unlimited so if a player scores another set of scatters during the free spins, they will be able to get another set of eight.

Besides that, there is the Wailing Bonus game. This is triggered by the six golden coins. All bonus symbols will then get an 18x multiplier and stay in place until the end of the three free spins. If another coin appears, then the player gets more free spins. The bonus ends when the respins run out or 15 coins have been tossed. These coins can give big bonuses and prizes.

Overall, this game looks good and can bring big rewards. Do check it out when it arrives at your favorite online casino.

Hurray! There is a competition going between users of our site!
You have to do nothing, but browse out site, and win a daily prize. Click here to read more.
You current ranking:
Time Left: 13h 20m 38s
Gambling is for 18+ though some countries may have other restrictions...Remember you should always Gamble Responsibly
We use cookies to ensure that we give you the best experience on our website. If you continue to use this site you agree to allow us to use cookies, in accordance with our Terms & Conditions.Agree & Close