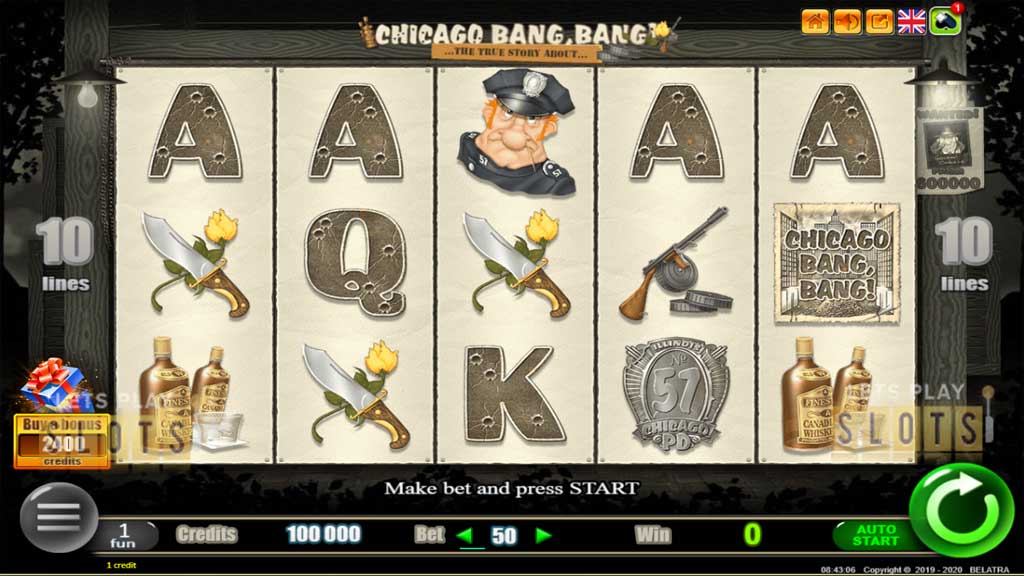 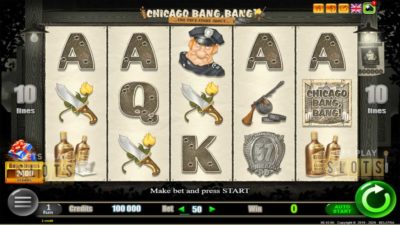 Chicago’s reputation for being the hub of the mob bosses back in the 1930s will never die. Some of the top movies and novels over the years have depicted Chicago as being the hot spot for some of the most notorious mob bosses in the last century. Belatra Games decided to use this theme in their latest slot offering called “Chicago Bang Bang“!

When players start this game, they are presented with a wanted poster for the main mob boss in the game Govanni Cabone. This is when the music kicks in and the game starts to draw players into the theme. The sound of sirens and gunshots signal that the game is ready to start. Though the approach is rather cartoonish, it works pretty well.

The game features the traditional 5×3 grid for its main play area. There are 25 paylines and the game is pretty volatile. This means that players have a chance to win big. The symbols themselves in the game are all pretty thematic. Players have to aim to score either cops, mobsters, tommy guns and even booze. Instead of the normal three symbol requirement, players win with only two. Additionally, the Chicago Bang Bang poster acts as the wild in the game.

The basic game is nothing to write home about but Chicago Bang Bang makes up for it with the special features. First, there are the free spins that players can get. This is thanks to the gangster cars, which are the game’s scatter. When they land, the gangster inside shoots the reel beside it! Depending on the symbol beside, players can get bonuses. Players can also score three gangster cars to give players 10 free spins.

Next, there is the bonus game. This involves the police car symbol. When it shows up, players get to go on a raid on a mobster haven. Players have to shoot wooden boxes. Depending on the random results, players will be able to get big bonuses.

Finally, when players score a winning combination, they always have a chance to go double or nothing. Players can draw a card and compare it against the computer’s card. If their card is higher, then they double their wins. They can also choose to either guess whether a card is red or black.

If you like crime novels and watching movies involving the mafia, then you will certainly enjoy Chicago Bang Bang!

Hurray! There is a competition going between users of our site!
You have to do nothing, but browse out site, and win a daily prize. Click here to read more.
You current ranking:
Time Left: 16h 58m 40s