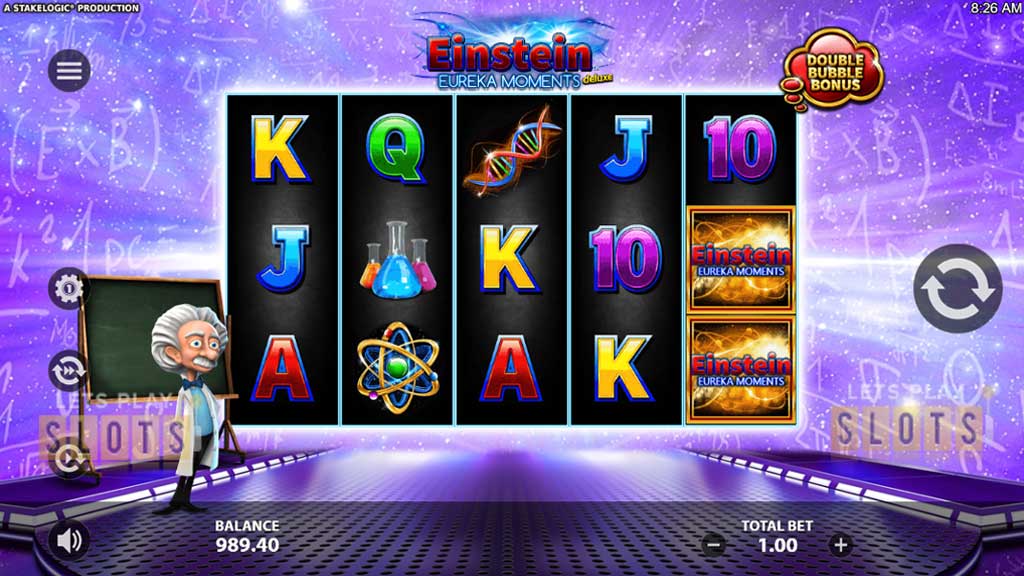 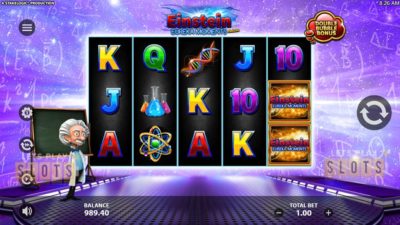 Albert Einstein is one of the most popular scientists in history. Among his many contributions is the General Theory of Relativity which changed the modern view on physics greatly. Though he was not the one to shout the word “Eureka” if there is anyone who deserves to say it is Albert Einstein. Stakelogic decided to come out with a new slot offering titled “Einstein Eureka Moments Deluxe“.

When players start this game, they will see a background full of equations and various scientific symbols floating around. The graphics are pretty great and they can see Einstein in all his shaggy-haired glory standing by a blackboard on the left. The game is optimized for mobile play, so players who are playing on their smartphones won’t have to worry about missing anything.

The game has the standard five by three grid for players to enjoy. With 20 paylines, players have a decent chance at winning. Each spin has a minimum bet of $0.20 but players can boost it up to $20 if they are feeling lucky. Depending on the winning combination, players will receive multiples of their stake.

The game has a decent mix of symbols. There are the card royal symbols that provide the majority of symbols in the game. These symbols have the lowest value. Next, the more valuable symbols are the two science symbols of DNA and the atom. The most valuable symbol though is the logo symbol. Players who score five of it will be able to get 50x their wager.

The game also has two special symbols. The Wild acts as a substitute for all symbols and the Scatter are essential when players want to trigger the special features.

The game has some pretty impressive special features, all of them named after a great scientist. Players can trigger most of them by scoring three of the scatter symbols, which are the Einstein bonus symbols. Players then get to pick which special bonus they will use.

First, there is Newton’s Free Spins. Players get unlimited free spins until all three apples hit Einstein on the head. Then there is Bell’s Multiplier Bonus. Players get ten free spins with a chance at a 10x multiplier when the phone rings. Next is Darwin’s Evolution Bonus. Eight free spins are awarded and when Darwin shows up, all of the lowest value symbols are removed a free spin is given. Finally, Edison’s Enlightening Bonus gives out eight free spins and one symbol will always change into a wild.

Overall, Einstein Eureka Moments Deluxe is a fun, chaotic game that deserves a spin or two.

Hurray! There is a competition going between users of our site!
You have to do nothing, but browse out site, and win a daily prize. Click here to read more.
You current ranking:
Time Left: 4h 32m 8s