Deploy The “Tractor Beam” And Help An Alien Invasion

Deploy The “Tractor Beam” And Help An Alien Invasion 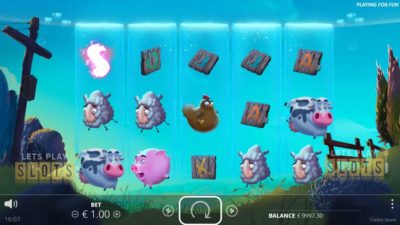 Most of the alien based movies or games revolve around a theme where they are the bad ones and humans have to fight to keep them away. Nolimit City has changed the concept around with their latest slot “Tractor Beam“.

In this game, players are helping an alien invasion and they have cloned an entire farmyard of animals to mess around with. This game features five reels and 20 paylines as the baseline of the game and it has some fun features that make this game a special experience.

When players start this game, they are introduced to a rather cartoonish farm. Set in rural America, players are hoping to score winning combinations on the reels made of wooden planks. The game features the royal cards as the game’s low value symbols.

There are higher paying symbols and they all come in the form of animals. These are the chicken, sheep, pig, and cow. Each of them are drawn in a funny cartoonish way so they can get a smile from the player’s face as they are scored. The most valuable of these symbols is the cow, which can reward 15 times of the player’s stake if five are scored. The game also has a wild symbol that replaces all the standard symbols and is as valuable as the cow.

The game features several extra bonuses that make the main game an interesting experience. For one, there are special feature that can be randomly triggered in every spin. This is called the Clone Attack! feature. Players will suddenly see up to four reels suddenly replaced by stacks of a high value animal symbol. This ensures a win most of the time.

Another random feature is the Beam‘Em Up feature. When this is triggered all of the lower value symbols get removed from play. The spin is then treated with the higher value animals symbols and wilds in play. This is another good chance for players to win.

The really special feature is the Abduction Spins feature. There are scatter symbols mixed into the regular symbols and players can score them. A minimum of three is needed to trigger the free spins. The most that players can get is 12 free spins.

During these free spins, when a winning combination is scored, the symbol is abducted and removed from the game until the free spins end. Additionally, when a scatter appears, an additional free spins is added.

Hurray! There is a competition going between users of our site!
You have to do nothing, but browse out site, and win a daily prize. Click here to read more.
You current ranking:
Time Left: 6h 4m 44s