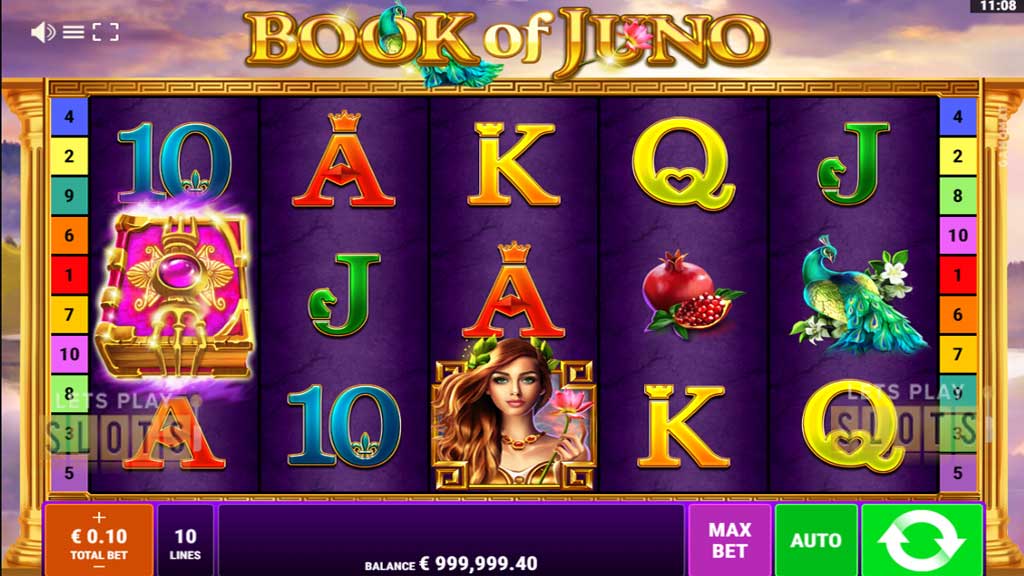 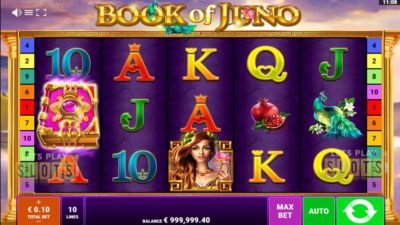 Slot game developers tend to experiment with diverse themes in an attempt to come out with a hit slot. One of the favorites is mythology as slot developers like to use the theme of divine luck and link it with winning. GAMOMAT has followed these lines with their latest slot released called the “Book of Juno“.

Juno was one of Rome’s leading goddesses who usually took the backseat to Jupiter and some of the other popular gods. This time around Juno she is the focus of the newest offering from the developer. Most players will struggle to recognize the Juno theme as it is not exactly obvious aside from the Doric columns. The grid is presented in the middle in the form of a book.

The game features the standard five reels and three rows set up. The game has 10 paylines so players have a good enough chance to win. This is helped by the high RTP of 96.14 percent. What is surprising is the betting range. Players can only wager from $0.10 to $6. That is not a very attractive spread. Players can potentially end up winning small amounts. The game’s max jackpot is at $3,000 which is pretty low compared to a lot of the new slots in the market.

The game has a decent spread of symbols. The lowest value ones are the card royals. For those who want a better payout, there are the more thematic symbols. There are the pomegranates and grapes, along with the peacock. Juno the goddess also shows up. Another symbol is the Book which serves as the game’s wild and scatter symbol.

Players looking for something a little extra should try to score the book symbol. As a wild, it allows for players to win more easily. It also pays out big time, especially when players score five of it.

Besides that, it will also trigger free spins when players score three or more of it. Ten free spins will become available and then a random symbol is selected. This will be the bonus symbol for the spins. When it shows up it will completely take over an entire reel. Players can also potentially trigger the free spins again.

Whenever players win, they have a choice between two gambling mini-games. These can potentially allow them to score big. One is a card game. Players have to guess whether a card is red or black. The other is the ladder game, which is more random. Players click on the ladder and it will randomly ascend or descend.

This is a different game from the usual slot and may not be everyone’s cup of team. The only way to find out is to spin the reels on Book of Juno and see whether this game is for you or not!

Hurray! There is a competition going between users of our site!
You have to do nothing, but browse out site, and win a daily prize. Click here to read more.
You current ranking:
Time Left: 14h 45m 39s
Gambling is for 18+ though some countries may have other restrictions...Remember you should always Gamble Responsibly
We use cookies to ensure that we give you the best experience on our website. If you continue to use this site you agree to allow us to use cookies, in accordance with our Terms & Conditions.Agree & Close