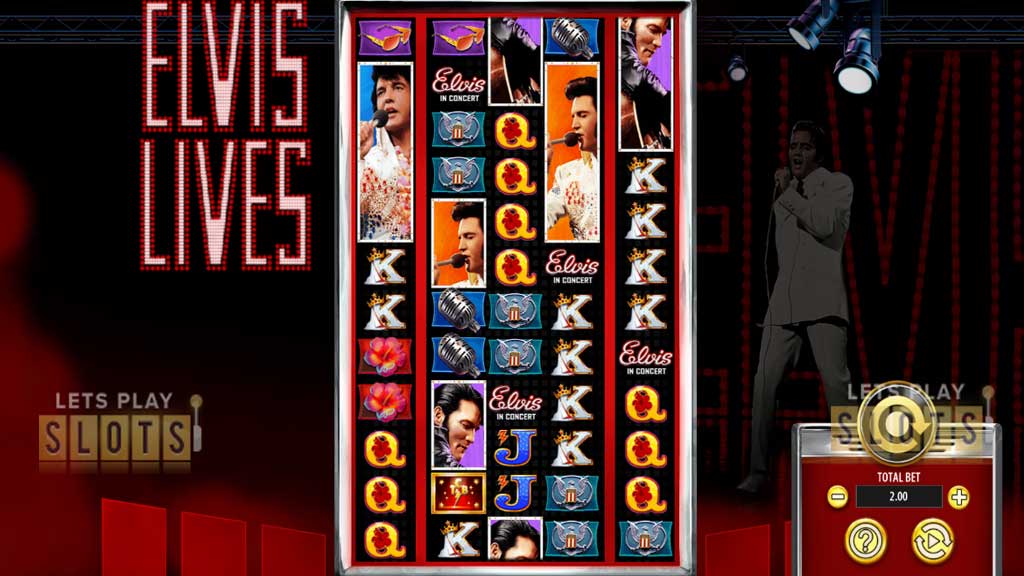 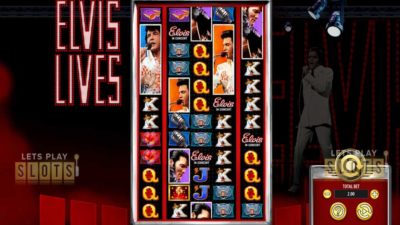 There are icons and legends in the music industry and then there is Elvis Presley. Need we say more? The Blue Suede Shoes king passed away on 16 August, 1977 but his legend still lives on through his songs and now through a new WMS slot game called ‘Elvis Lives’.

This new Elvis Lives slot game brings his music to life as players spin the reels and get a chance to interact with the King of Rock and Roll.

When players start this game up, they will immediately see the image of Elvis Presley in the backdrop. The game then presents the reels for the game. WMS decided to go big and gives the players five reels and 12 rows. There are 60 paylines for players to score their winning combinations.

Winning combinations come in the form of three or more symbols on the same payline. While players will be happy to hit the low-scoring card symbols, their main goal will be to get the more valuable symbols. This includes sunglasses, microphones, flowers, belt buckles and Elvis himself.

There are three different Elvis symbols. They represent the King in various parts of his career. Players who get five of them on a payline get double their stake. Elvis, in another pose, also acts as the wild for this game. It may seem confusing but the Elvis symbols are quite distinct from each other. Besides this, the three middle reels have the Elvis Reels feature. This means that the reels can spin out a giant Elvis symbol that occupies multiple spaces.

Besides the basic game wins, players can score winning record sleeves that will activate a variety of bonus features. First, there’s the Aloha Free Spins feature. Players get seven free spins and there are special wild symbols in play that move around. Next, there is the TCB Free Spins feature. Players get five free spins and players have a chance to multiply their wins.

Third is the Jumpsuit Picker Bonus feature. Instead of free spins, players get to pick three gems from a selection to get a cash prize. Players can get additional gems to give them more picks. Players who fully use up the bonus get a fixed jackpot of 500 times their stake. Finally, the Elvis Lives Bonus feature allows players to light up the Elvis Lives sign above the reel. The more letters that are lit, the bigger the cash prize!

This game is an interesting experience and should be a must-try for Elvis fans!

Hurray! There is a competition going between users of our site!
You have to do nothing, but browse out site, and win a daily prize. Click here to read more.
You current ranking:
Time Left: 5h 46m 29s