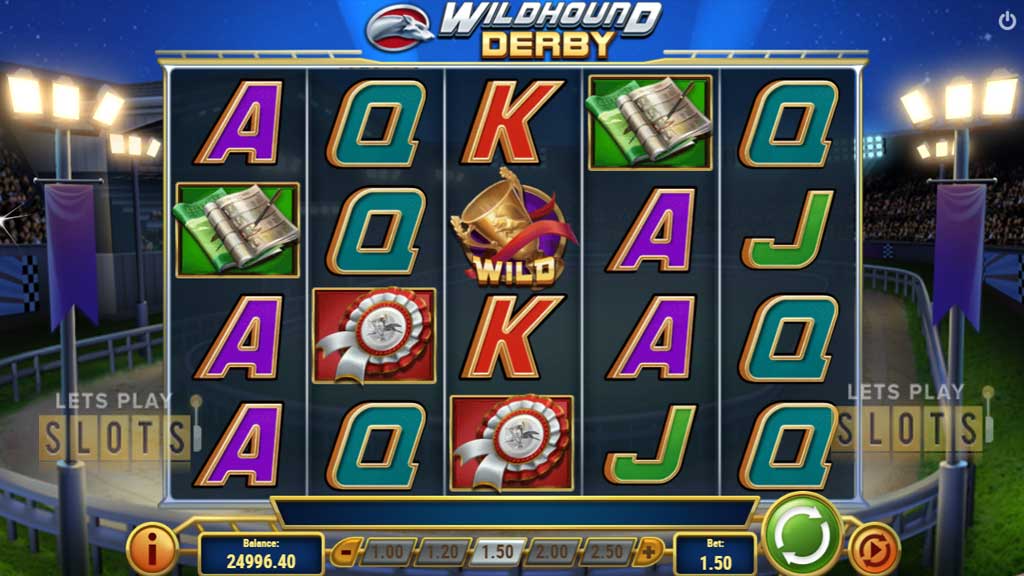 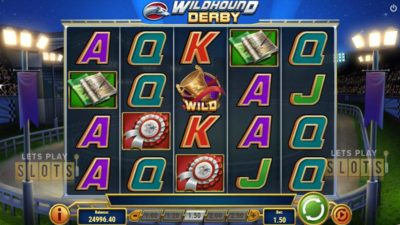 When most people think about animals racing, the first thing that comes to mind is the popular sport of horse racing.

However, hound racing is growing in popularity with every passing year. Hound derbies focus on greyhounds and other racing dogs competing with each other to reach the finish line.

Though it is not as well-known as horse racing, hound racing still has a pretty good fan base.

Play’n GO has decided to run with the theme and come out with a new themed slot called “Wildhound Derby“.

Players start this game out at a British dog racing track where all the action happens. This is a pretty no-nonsense with its theme so players get to jump directly into the game. The grid it uses has five reels and four rows and boasts of up to 30 paylines.

The goal is to score winning combinations. The game has the usual A, K, Q, and J royals which act as the low-value symbols. Players will want to score the more unique symbols that include betting slips, dog track tickets, winner’s ribbons and bundles of cash. The cash symbol is the most rewarding for players. Anyone who scores five of it on a payline will get 100 times their stake.

The game also has some interesting symbols. There are five wild symbols and they all replace normal symbols and provide the same payout as the bundle of cash. The regular wild symbol is the Winner’s Cup and it appears in all the reels. The other four wilds are the racing dogs Braveheart, Daring Dex, Beadle’s Teabag and Oh My Dog. These symbols show up only on the fifth reel and can activate the Dog Race feature.

Off to the Races

Since the four wild symbols all appear on the fifth reel, there is a chance that all of them show up at the same time. If this happens, the Dog Race feature kicks in. Players then are given the choice on who they think will win the race.

It is an actual race as the wild symbols remain on the fifth reel and players will get free spins for the duration. A special symbol shows up for this race: the Golden Hare. During the free spins, when it lands, the dog on its row will move forward one reel. There can be multiple Golden Hares though so this can be exciting. The end of the free spins comes when a dog reaches leaves the grid.

Players will collect all their prizes from the free spins if the dog they chose does not win. If their dog goes on to win, they move on to the Winner’s Wheel feature. Players are then given a chance to get a multiplier for free spin winnings. The maximum is a 15 x multiplier so it can be pretty big. Overall, this looks to be a fun game and players should give it a spin.

Hurray! There is a competition going between users of our site!
You have to do nothing, but browse out site, and win a daily prize. Click here to read more.
You current ranking:
Time Left: 21h 4m 6s