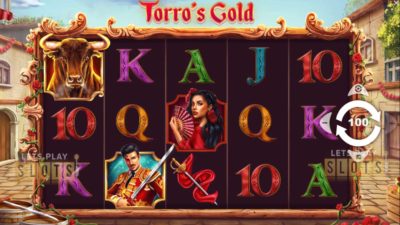 The ancient art of bull fighting has been a staple of Spanish culture for a long time. Though controversial, it is still a major draw today and gets a lot of attention throughout the world. Since most people are not going to be stepping into the ring with a bull anytime soon, Pariplay is bringing the action to them with its new “Torro’s Gold” slot.

Players who start this game up won’t be directly placed in the ring. Players will be placed in the quiet street of a small Spanish town. The background music is a traditional guitar playing in the background and the roar of the crowd somewhere, cheering the bullfighters on.

Players are soon presented with a grid with five reels and three rows. The symbols on it are mainly about bullfighting, with the matador, the sword and the bull. There is also the card royals present for the low-value symbols. The game has 10 paylines and requires players to score three or more symbols to get a win. The RTP for this game is at 96.24 percent.

The game’s two most valuable symbols are the Matador which gives a big prize and the Senorita, which acts as the wild. The Bull is also there to act as the scatter.

The game has a number of special features that will allow players to have more fun. The first is the Bull Scatter. Players who score three or more of the Bull symbol will get a round of free spins. During these spins, the Senorita will be sticky, which means she will stay around to ensure that there are more wins.

There is another scatter symbol though. The Book also gives players a chance at free spins. The bonus is very different though. Instead of sticky wilds, a random high-value symbol will be chosen during each spin. When the spin is done, the symbol will then expand to fill the reels. This makes it much easier to win.

Finally, players may want to make that final gamble on each spin. When players get a win, they have a chance to double their prize. If they wish, they can choose to Gamble, and they are asked to guess the color of the cards presented to them. A lucky player can quadruple their prize if they get it right. If they lose though, they lose the spin.

Overall, this is a fun game from Pariplay that tests each player’s luck. Players who want that thrill should try out Torro’s Gold!

Hurray! There is a competition going between users of our site!
You have to do nothing, but browse out site, and win a daily prize. Click here to read more.
You current ranking:
Time Left: 19h 48m 25s