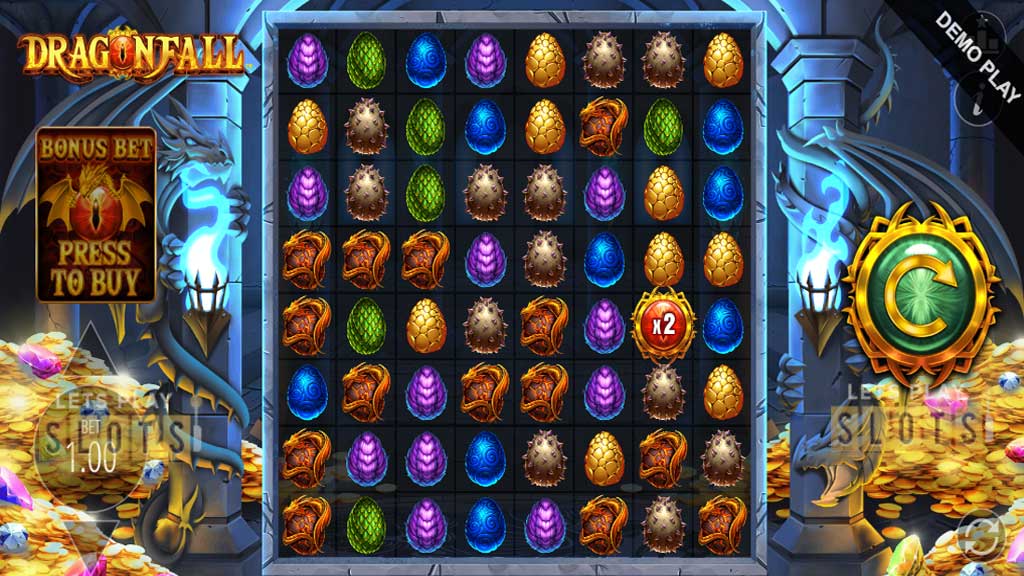 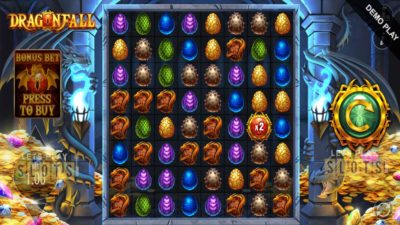 Fantasy adventures are a popular theme for slot developers as the fascination of exploring the unknown and experiencing an adventure continues to thrill slot players. Blueprint Gaming has come out with a new fantasy themed slot called “Dragonfall” which is based around dragons and treasure in a fantasy land.

Dragonfall takes players to a lair of a terrifying dragon in hopes of stealing some of its treasure. The RTP on this game is 96.43 percent.

Players who start up this game will immediately be impressed with its graphics and soundtrack. They draw the player in and set the mood to enter a fantasy experience. The setting for the game is inside a dragon’s lair, filled with gold and gems.

The game features a large eight by eight grid to allow players to win more easily. Instead of the normal paylines, the game looks for a cluster of five or more symbols. The maximum amount of symbols scored is 25 for a full payout.

For the symbols, the game features six types of dragon eggs. The most valuable of them is the one with a dragon wrapped around it. Players who score 25 of it will get 100 times their stake. It is not going to be easy to come out with a win. Winning combinations are removed from the game but new symbols will drop down from the top.

The new symbols can create new combinations and as long as the player keeps on winning, the cascading symbols will continue. This can mean a chain reaction of wins. It also helps that each win will apply a multiplier to future wins.

During these spins, special symbols will keep showing up. There is always a chance that a Giant Egg symbol can drop down. These symbols occupy multiple spaces and increase the chance of a win. Players can also hope for the Dragon’s Eye symbol, which is the wild. It replaces all symbols so that a win becomes easier. Besides that, if it is part of a winning combination, it stays in play until the entire cascade is done.

Overall, Dragonfall is a fun little game that changes the usual slot formula. Players have a chance of winning 50,000 times their stake which should be reason enough to give it a spin.

Hurray! There is a competition going between users of our site!
You have to do nothing, but browse out site, and win a daily prize. Click here to read more.
You current ranking:
Time Left: 22h 33m 38s
Gambling is for 18+ though some countries may have other restrictions...Remember you should always Gamble Responsibly
We use cookies to ensure that we give you the best experience on our website. If you continue to use this site you agree to allow us to use cookies, in accordance with our Terms & Conditions.Agree & Close