Enter The Mysterious World of the “Night Queen” With iSoftBet

Enter The Mysterious World of the “Night Queen” With iSoftBet 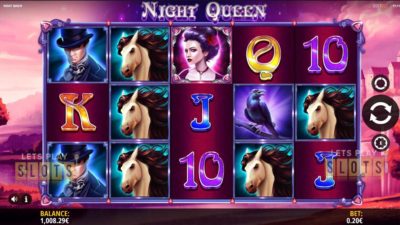 The darkness of the night holds its own appeal as it tends to bring out the best and the worst.

There is a whole branch of folklore that deals with things that go bump in the night. With the mysteries of the night beckoning people in, iSoftBet has decided to use it as the basic theme of their new offering, “Night Queen“.

Players are invited to explore the realm of this dark and fascinating lady who has some mysterious secrets for players to uncover.

The Night Queen dwells in an imposing castle and players are invited to visit.

Overlooking a deep and dark lake, the playing grid is displayed prominently in front of the entire scene. The graphics and the music combine to put players into the mood for some interesting gameplay.

This game has a grid of five reels and three rows. The game’s 20 fixed paylines should provide players with a good chance at winning. The game is highly volatile though and has an RTP of 96.26 percent.

The Night Queen slot has the standard rules for getting a winning combination. Players need to get a set of three or more symbols starting from the left on one of the paylines. The game has a pretty good mix of symbols. There are the card royals that act as the low-value symbols for the game. For the more valuable prizes, players will need to score one of the special symbols that include the Night Queen herself. She awards 100x a player’s stake when they score a full grid of her.

Due to the theme, the game features some special powers for the characters and the game. Players will love the surprises that are in store for them. First, there are the switching stacks. After every spin, players will notice that some symbols change locations. This is because they are trying to improve their chances of winning.

The game also has a chance of giving out super stacks. During every spin, the game will randomly choose a symbol to drop a whole stack of. This can improve a player’s chances of winning. The dropping of stacked symbols can also be a big bonus to players. When three or more reels of stacked winning symbols appear, they can become one huge symbol. This adds a multiplier to the symbol so that it can boost any win that it is part of.

Players can score up to 3,723 times their stake. This doesn’t even include the up to 15 free spins that players can get. Overall, this is another impressive game from iSoftBet!

Hurray! There is a competition going between users of our site!
You have to do nothing, but browse out site, and win a daily prize. Click here to read more.
You current ranking:
Time Left: 22h 1m 37s