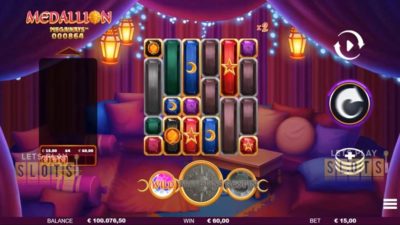 Treasure hunts are a favourite theme with slot developers. This is not surprising because slot games are in many ways like treasure hunts, with players seeking to win the jackpot.

All treasure-hunting slot games have exotic locales and Medallion Megaways is no exception. Players are taken to a tent in the desert and play the game on a six by six grid.

At the beginning there are only 64 ways to win. But as players unlock more symbols per reel, the chances to win increase. The maximum amount of possible ways to win is 46,656.

Players are hoping to score winning combinations of the various symbols in the mix. There is a mix of gemstones, crescent moons, triangles and stars. The great thing about the game is the Avalanche feature. This happens when players get a winning spin. All the winning symbols are removed and new symbols fall down. If there are more winning combinations from that mix, players will keep on getting wins with additional multipliers. When the avalanche stops, the multiplier is reset.

Players who like the Avalanche and the Megaways features should enjoy the additional bonuses. For one, the special gemstones that are part of the mix can activate a number of different bonus features.

For example, players who score a purple and blue gemstone will activate expanding wilds. When the wild symbol appears, it will expand to fill their reel. Besides making the wins easier, it will also give the reels multipliers. It can either be 2x or 6x. Plus, if multiple reels score a winning combination, the multipliers can combine. This can give players a maximum of a 12x multiplier.

Players who score a green gemstone get a Void Respin. Players will find that anywhere between two to ten symbols being removed from the reels and replaced with new ones. This can give players a chance to win more.

Finally, there is a golden eye medallion symbol that triggers ten free spins. During these free spins, it is possible to activate some other interesting features. Combine everything into one lucky spin and players can get up to 23,360x their stake.

Hurray! There is a competition going between users of our site!
You have to do nothing, but browse out site, and win a daily prize. Click here to read more.
You current ranking:
Time Left: 23h 22m 19s
Gambling is for 18+ though some countries may have other restrictions...Remember you should always Gamble Responsibly
We use cookies to ensure that we give you the best experience on our website. If you continue to use this site you agree to allow us to use cookies, in accordance with our Terms & Conditions.Agree & Close