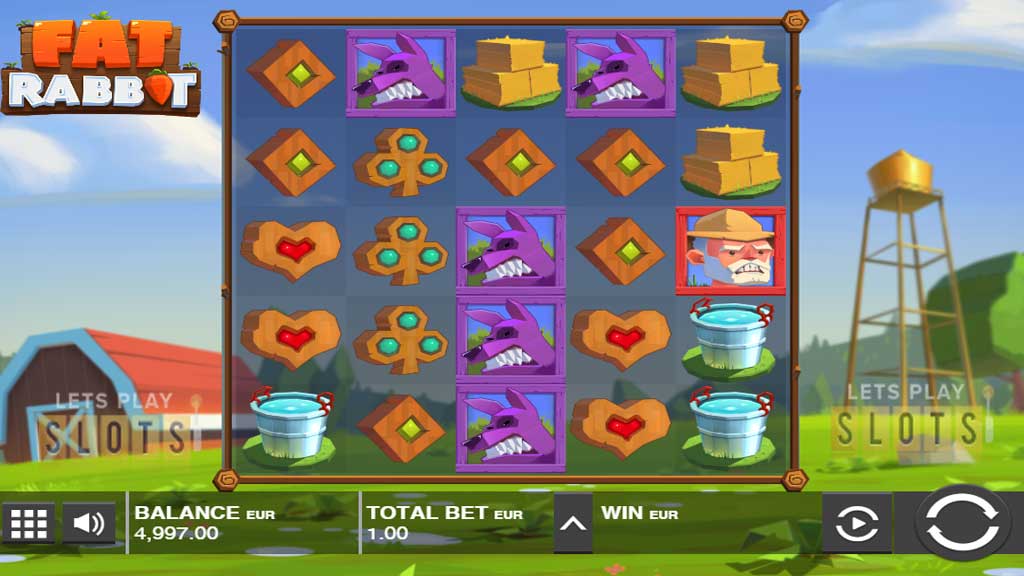 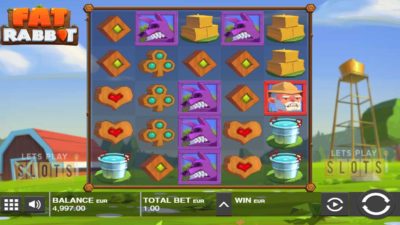 When you look at a farm from afar, you think of peace and relaxation. However, when you work on a farm you realize the amount of work that is involved and no farmer likes their work to be ruined.

Push Gaming has come out with an interesting slot called ‘Fat Rabbit’ which shows you how this ornery critter can cause so much havoc at the farm.

Players will get the opportunity to visit the farm and go in search of the fat rabbit! This is a fun little slot game from Push Gaming that presents a rather unique theme. When players start it up, they are presented with a cartoon farm. The graphics are pretty decent and the feel of the game is impressive.

The game features five reels and 50 paylines so players have a pretty good chance of winning during each spin.

Fat Rabbit’s spins are aimed at scoring winning combinations. The game has a set of low-paying symbols that are represented by the different card suits. When it comes to the more valuable symbols, there are several symbols like the farmer, the dog, the water bucket and the hay bales. The most valuable among them is the farmer, with five of them giving a payout of 20 times a player’s stake.

The fat rabbit symbol can be used as any symbol and can help complete winning combinations. The only symbol that the rabbit does not replace is the carrot. The carrot symbol is also a wild and replaces every symbol except for the rabbit symbol.

The game gives players a good chance at winning but the bonuses make it a bit more enjoyable. For one, there is the Harvest feature. This is when an animated tractor shows up randomly. This plows a random set of reels under and drops a set of wild carrot symbols over them. This is when the other reels get a spin. When it is done, players get a chance to score the new configuration.

The game also gives players a chance to get some free spins. This is what happens when the rabbit and a carrot show up on the same spin. The rabbit then proceeds to where the carrot is to eat it. Players will also be rewarded five free spins. The rabbit will then stay on screen as long as more carrots show up, adding to the meter.

When five carrots are eaten, the rabbit expands into a 2×2 symbol and then the process repeats. In theory, as long as the carrots keep showing up, the rabbit can balloon into a 5×5 wild symbol.

Overall, Fat Rabbit is a fun little game that is a good diversion. Players should give it a spin as they are bound to have fun and have a chance at winning a nice prize.

Hurray! There is a competition going between users of our site!
You have to do nothing, but browse out site, and win a daily prize. Click here to read more.
You current ranking:
Time Left: 13h 31m 22s
Gambling is for 18+ though some countries may have other restrictions...Remember you should always Gamble Responsibly
We use cookies to ensure that we give you the best experience on our website. If you continue to use this site you agree to allow us to use cookies, in accordance with our Terms & Conditions.Agree & Close