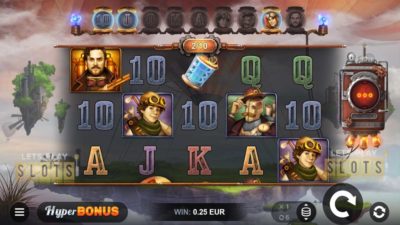 There are millions of people who love to fly and some of them who like doing daredevil stunts in the sky. Kalamba Games takes this fascination and combines it with steampunk sensibilities and introduces players to its new “Sky Hunters” slot.

In Sky Hunters, players are part of the crew of a flying machine that looks like it is straight out of a steampunk or Jules Verne novel. When players start this game, they are introduced to a flying island up in the clouds.

The grid is laid out in a box of copper pipes, with electricity crackling all over them. The theme is exciting and the visual design is pretty good. There is great background music that makes it easy for players to get immersed into the theme.

The layout is five reels and three rows. There are 20 fixed paylines to try and win with. The low-paying card symbols occupy most of the slots. Players will need three of each symbol to get a win. The more valuable character symbols only need two on a payline to trigger. There are four characters in the game and there is one wild symbol in the form of an airship. The game’s RTP ranges between 96.27 to 97.64 percent which gives players a good chance at a win.

The real draw of the game is the special features built into the game. First, there is the Lucky Loops feature. Every 10 spins, the game selects a random symbol that becomes a special Expanding Symbol. When it appears on the reels, they expand and help create winning combinations. Players can also potentially get free spins. All they need is three Wild Symbols on a payline. If a player gets the Treasure Chest symbol as part of the win, they can also get even more free spins.

Overall, the game is a very volatile experience. Kalamba Games players who are willing to risk a lot will enjoy it and can potentially win big if they get lucky.

Hurray! There is a competition going between users of our site!
You have to do nothing, but browse out site, and win a daily prize. Click here to read more.
You current ranking:
Time Left: 4h 59m 18s