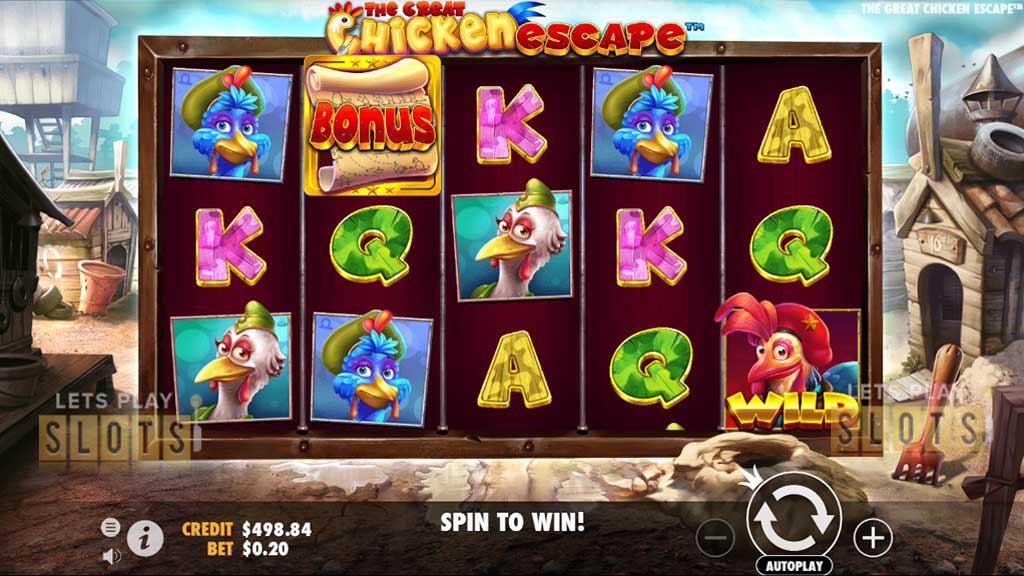 Fly The Coop With “The Great Chicken Escape” 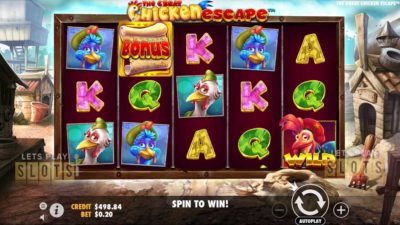 Chickens tend to have a hard time in life spending most of their time in their coop. Pragmatic Play decided to use this unique theme to let players assist these chickens to plan their escape. “The Great Chicken Escape” slot uses graphics that remind people of the classic movie called Chicken Run and will surely entertain players with its mix of random features that makes every spin exciting.

When players start this game, they are greeted with the view of the camp where the chickens are trying to escape. With the chickens as soldiers, the visuals remind people of World War II movies. The game has five reels and 20 paylines, which is a standard for many slot games. Players can also access the game using multiple devices. This includes desktops, tablets and smart phones.

Players will be aiming to score winning combinations of symbols. The low-value symbols for this game are the A, K, Q, and J card symbols. The more valuable symbols are the individual chickens that have rank insignia. There are four of them and the most valuable is the sergeant. Players get 15 times their stake when they get five of him on a payline. There is a wild symbol, and this is Charlie the Chicken. Players can use him as any symbol except for the scatter. He also gives out 25 times a player’s stake when five of him are scored.

The real draw of this game are the random spin features. Every time a player spins, they can trigger one of three features. First, there is a Guard Dog Wilds feature. This adds a random number of wild symbols. Next is the Chicken Run Wilds feature, which turns up to four reels into wild reels. Finally, there is the Care Package feature. Golden eggs appear on the reels and they randomly become a symbol at the end of the spin.

Players can also score the scatter symbol, which is the map. Players trigger a random bonus feature when they score them. This includes the Secret Tunnel Bonus feature, which allows players to pick a random prize or to progress further into the tunnels, which gives players more bonuses. There are a number of special features that make this game exciting and payout big rewards.

Do check out the Great Chicken Escape when it comes to your favourite online casino!

Hurray! There is a competition going between users of our site!
You have to do nothing, but browse out site, and win a daily prize. Click here to read more.
You current ranking:
Time Left: 5h 20m 43s