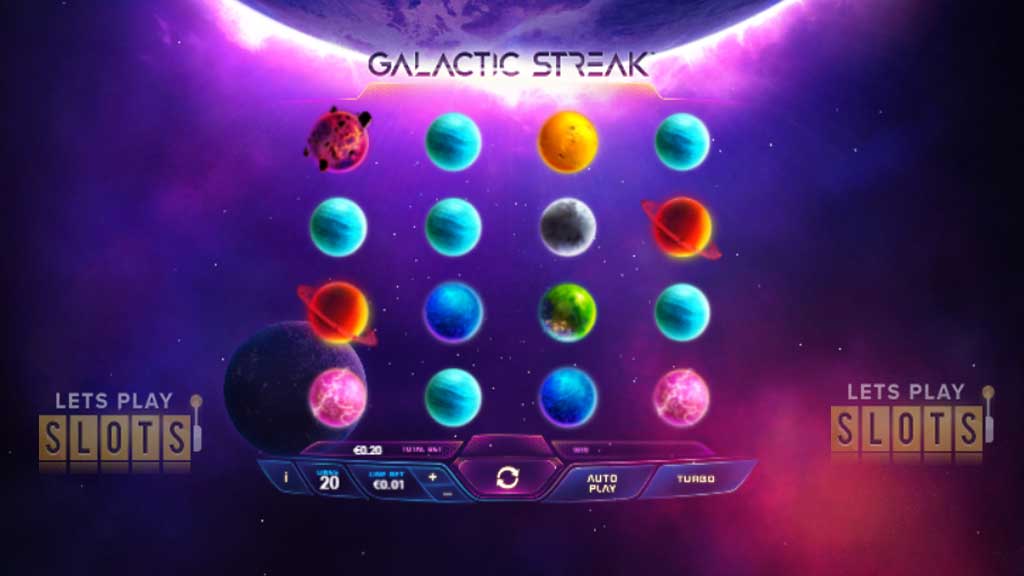 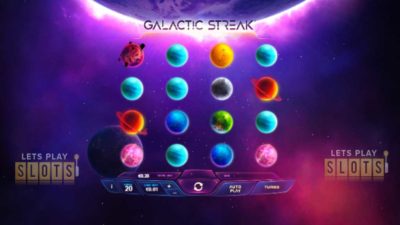 Playtech is known for making some of the best slot games in the market and the company looks like it is going to have another hit on its hands with its latest release – Galactic Streak.

This four reel, four-row slot game takes players on a wild ride into outer space. Playtech put in a lot of effort into designing this game and it shows.

Galactic Streak has an interesting set of paylines that that will make players sit up and pay attention. Though it has some of the normal left-to-right lines in its 20 paylines, the game also has some bottom-to-top lines.

This means that players will have a chance to win if they get a line of plants down a reel. Players can also win for combinations starting from the right.

The game has some great graphics and excellent gameplay. Instead of the planets rolling down and spinning in the reels, the symbols are sent flying towards the players. The replacements land on the reels and become the next set of symbols. The audio is also appropriately space-themed, with the joy of exploration noticeable in both the music and audio.

Various planets act as the symbols in the game, with varying levels of payouts. There are two special symbols in the game. The burning sun acts as the wild for the game. It also happens to be the most rewarding symbol. Players who get it as their winning combination symbol can get 12.5 times their original stake. The other symbol is the galaxy symbol which acts as the scatter symbol.

Galactic Streak has some very special features that make it a great game for those who want to win big. One of these special features is the Orbit feature. Players get a multiplier every time that they win. The first win gives players a 2x multiplier. There is also a spin counter of three.

Players lose that multiplier when the spin counter gets to zero, with each non-winning spin deducting one from it. The great thing about the Orbit feature is that the next winning combination increases the multiplier by one and resets the spin counter.

The big bonuses come when the Free Games bonus is activated. Players get this when they get three scatter symbols in a winning combination. Players get 10 free spins and if they score two scatter symbols during the free games, win multipliers are added to the spins. The maximum players can get is 500 times their stake – which is why Galactic Streak is a great choice for space adventurer

Hurray! There is a competition going between users of our site!
You have to do nothing, but browse out site, and win a daily prize. Click here to read more.
You current ranking:
Time Left: 6h 25m 25s