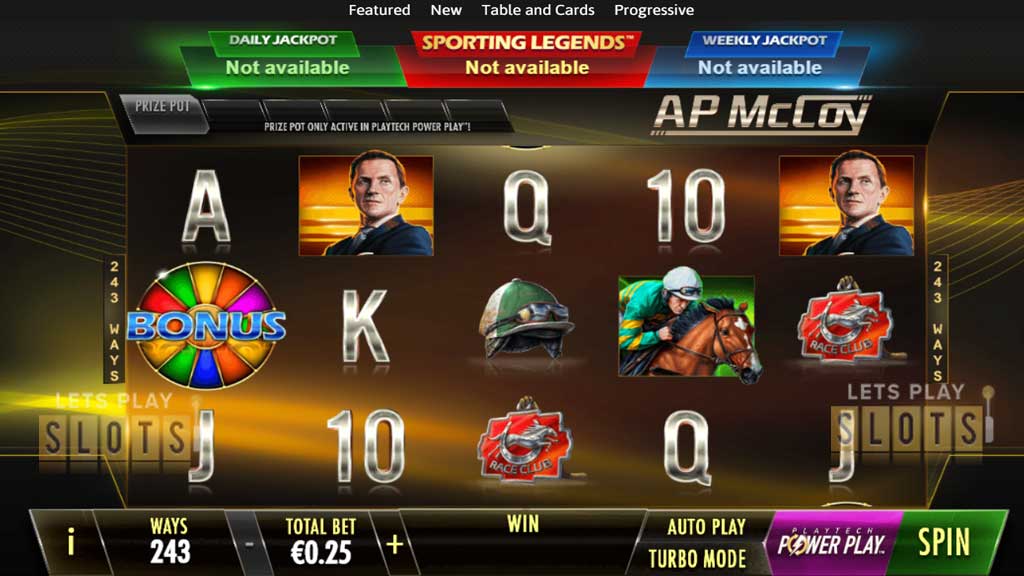 AP McCoy is a legendary jockey who dominated the race track and made a lot of people money who were smart enough to bet on him.

Now, Playtech is allowing players to once again join him on the track with their latest slot game.

When this game starts, players will be greeted with a dark background and simple reels.

However, it is the great soundtrack and the gameplay that will keep them fully engaged. Plus, AP McCoy himself will be talking as the reels spin. The aim is to get the winning combinations of symbols and there are many to aim for.

There are the low-paying symbols, the card symbols, which most slot game players are familiar with. There are more valuable symbols which include trophies, racing helmets, racing clubs, badges, and AP McCoy himself. The legendary jockey is the most valuable symbol of the bunch, with five symbols of him giving players 100 times their original stake.

Besides the basic symbols, players will also have a better chance of winning with the presence of the Wild symbol. This symbol can act as any symbol except for the scatter symbol, which is the Bonus Wheel.

Going For The Gold

Players get the Bonus Wheel activated by having them appear on three reels, which then activates the game’s profitable bonus feature. Players have the chance to spin the wheel and can potentially get free spins or cash prizes. After the initial spin giving players a bonus, the wheel then gives out more bonuses. This comes either in the form of another spin or 10 free spins in the Winning Line Free Games Feature – which has a lot more bonuses.

Players can also activate the Playtech Power Play Feature. By activating it with the button at the bottom of the screen, players can accumulate their wins to get free spins. However, do note that the stakes get higher depending on the level chosen.

Finally, the game is connected to the Sporting Legends Progressive Jackpot. There are three jackpots available and players have a random chance to win one with every spin. Players lucky enough to enter the jackpot game will have a crack at winning at least one of three jackpots. Overall, this game is an excellent addition to the Sporting Legends series and is worth the try.

Hurray! There is a competition going between users of our site!
You have to do nothing, but browse out site, and win a daily prize. Click here to read more.
You current ranking:
Time Left: 21h 37m 26s