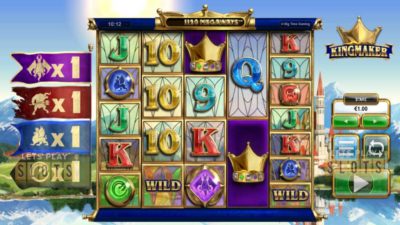 Royalty continues to hold a special place in the hearts of millions of people who are fascinated with the ways of the Royal family. Big Time Gaming is using that fascination to draw players to their latest MegaWays game called “Kingmaker“. This new slot takes players to a fantasy kingdom to see whether they can crown someone to be king.

Players are introduced to the game by being taken to a medieval countryside with a magnificent castle prominent in the background. The background music is fit for a king and will put players in a great mood to enjoy this royal slot. The game has five reels and uses the MegaWays game engine which gives players up to 16,807 ways to win. Players can enjoy this game on a variety of platforms enabling them to play while on the move.

The goal of the game is to get winning combinations of symbols. There are several low-value symbols, all of which are playing card symbols. This includes A, K, Q, J, 10 and 9. Players can also aim for the more valuable gemstones. These are the blue dragon gemstone, green snake gemstone, red minotaur gemstone and purple dragon gemstone. The purple dragon is the most valuable. It gives out 10 times a player’s stake if they get five of it. There is also a wild symbol that makes it easier to win.

Slot game players are not after the basic wins though as they want to trigger the bonuses and win big. For this game, there is the Multipliers feature. This feature helps to multiply the value of each win. Players will get a bonus multiplier each time they get a five of a kind multiplier win. This adds up on the meter displayed on the side.

The game also has a scatter symbol in the form of the spinning crown. This pays in any position and players get 250 times their stake if they get five of it in a combination. Besides that, players who get three scatters will trigger the Free Spins feature. Players can get up to 20 free spins when they score it.

Overall, Big Time Gaming‘s Kingmaker looks like a great game and gives players a chance to win up to 40,000 times their stake provided they get lucky!

Hurray! There is a competition going between users of our site!
You have to do nothing, but browse out site, and win a daily prize. Click here to read more.
You current ranking:
Time Left: 1h 38m 46s