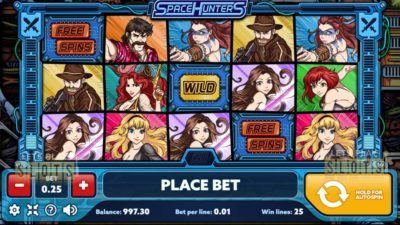 “Space Hunters” is an interesting new slot game from PlayPearls. This game takes players deep into space to hunt down villains who are hiding out. The game is full of action and does a great job of show casing how the Hunters track down villains. PlayPearls has done a good job with the graphics and the background music does justice to the theme.

The game welcomes players to the galaxy and then drops them in front of a five by three grid which has 25 paylines. While this grid is not that impressive, it is helped by the high RTP of the game which is at 97 percent. The variance of the game changes from medium to high and players should not expect big wins. The highest that players can get is around 300x their bet.

Players who would like to keep spinning the reels fast can make use of the auto-spin feature that gives you the option to set how many spins you want to run till you register a win. The betting range starts from $0.025 and goes up to $25.

The great thing about the game’s symbols is that they are all thematic as the developer has not gone with the usual card symbols. There are eight symbols in total and they come in the form of the different Space Hunters involved in the game. The most important of them is the pink woman and her biggest payout comes when you get five symbols matching on the paylines.

While the basic game is a lot of fun, the game gets better with the bonus features. The wild symbol can substitute for all other symbols except for the Space Hunters Logo and the Free Spins symbol. Players will also like the Free Spins symbol in the game. Players can land it like any normal symbol and then get free spins credited to their account. The minimum is 10 free spins but players who max it out get 30 free spins.

Finally, there is the Space Hunters symbol. These are collected as they appear. When players collect eight of these symbols, an arcade mini-game loads up. Players then get to fight enemies and loot treasure like in a normal video game. This is the highlight of the game and it provides the most entertainment. Players earn more wins when they beat down more enemies.

Go ahead and spin the reels on Space Hunters and see if you can trigger the mini-game.

Hurray! There is a competition going between users of our site!
You have to do nothing, but browse out site, and win a daily prize. Click here to read more.
You current ranking:
Time Left: 5h 48m 44s