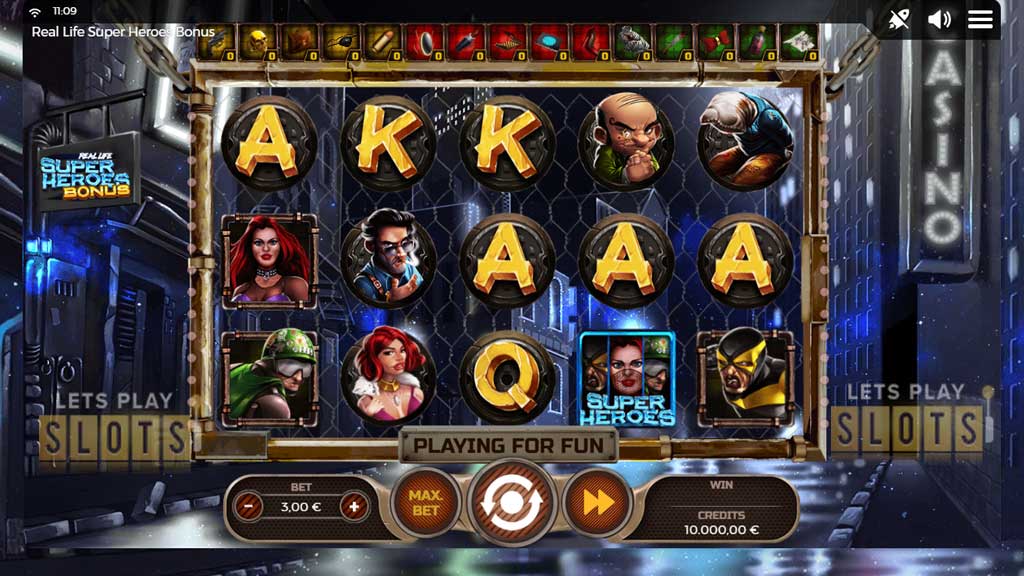 Get Ready To Save The Day With “Real Life Superheroes Bonus” 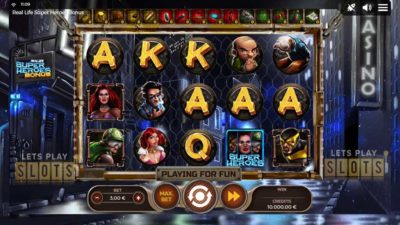 Who hasn’t dreamed of being a superhero, stopping crime and rescuing the innocent from the clutches of evil. You can now enjoy that experience and you don’t have dress up in spandex to be a superhero. All you go to do is try out the new offering from Spinmatic “Real Life Superheroes Bonus“.

The great thing about Real Life Superheroes Bonus is the great graphics that it has. Spinmatic has a reputation for coming out with great graphics in their games and they did not skimp out on this one. They used a cartoony theme but the 3D graphics make it pop. When players start this game, they are transported to the city’s streets, ready to fight crime. This is done through a very good animated intro that gets players in the mood for crime fighting.

Once this is over, players are presented with a 5×3 grid where all the action happens. Though it looks a bit bland at first, things can get colorful fast when winning combinations hit the screen. There are eight symbols. Four of them are non-superheroes, either criminals or innocent bystanders. The more valuable symbols in the set are the heroes. They include Phoenix Jones, Nyx, and Mr. Extreme. All the action is happening with a hard rock soundtrack in the background. There are also the card symbols which are the least valuable in the game.

This slot has some really good special features which is important when selecting a slot to play making it worthy of superhero status. There are two special symbols. First, there is the Devilish Villain Wild. It only appears in the three middle reels and can act as all other symbols. The game also has a Scatter symbol, which is its logo which can activate the special bonus game.

When the bonus game triggers, players pick one superhero to give them a bonus. Depending on who they select, they can get more free spins or higher multipliers. There are also mini-games attached to each hero. For example, the bonus game for Phoenix Jones allows players to select attack or defense. If they successfully attack or defend, then players get 50 coins for each success. The other heroes get their highlights that allow them to win big.

Overall, Real Life Superheroes Bonus provide players with a great time! Do give it a spin or two!

Hurray! There is a competition going between users of our site!
You have to do nothing, but browse out site, and win a daily prize. Click here to read more.
You current ranking:
Time Left: 19h 5m 53s