Go On An Undercover Mission With ‘Spy Rise’ From Playtech

Go On An Undercover Mission With ‘Spy Rise’ From Playtech 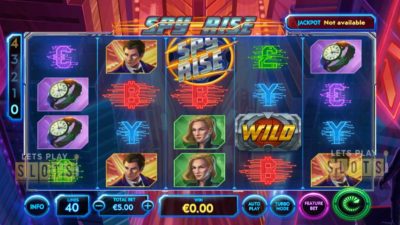 Playtech has come out with some unique and interesting slots over the years that have thrilled slot lovers. The gaming developer is about to release ‘Spy Rise’, a new slot title that is based on an undercover mission.

This game features a futuristic Asian city where secret agents will be put through an undercover mission that will allow them to win some incredible prizes. The game has five reels and 40 paylines and some great gameplay.

In Spy Rise, players will have several unique symbols to aim for. Dollars, yens, pounds, euros, and bitcoins are some of the low-paying symbols. There are also four secret agent symbols that pay a lot more.

They include the sports car, the watch, and the male and female secret agents. The male spy is the most valuable of these symbols, with a return of 50 times the stake when players get five of it on a payline.

The great graphics and exciting music will keep players engaged right from the start. However, the real draw of the game is its bonus features. One of these is the Feature Bet button. Players can pay extra so that certain symbols are upgraded. Depending on the level of the upgrade, more symbols are made valuable.

Level one just increases the stake 1.5 times. But it makes the watch value increase to 58.33 x the stake. Level two doubles the stakes but also adds the sports car to the increased value symbols. Level three further increases the stake and adds the female agent to the mix. Finally, level four upgrades all the special symbols which come at the cost of tripling the stakes.

Besides enhancing the normal game, players can also get free games by scoring the Spy Rise scatter symbol. Players then get 10 free spins and symbols, which can now be scored from left to right and right to left. Additionally, upgraded symbols are locked in place if they are part of a win, so that the next spins get to be more valuable.

Spy Rise is an excellent game with a fun theme and exciting gameplay. Interested players should try it out when it arrives at their favorite online casino.

Hurray! There is a competition going between users of our site!
You have to do nothing, but browse out site, and win a daily prize. Click here to read more.
You current ranking:
Time Left: 19h 59m 12s