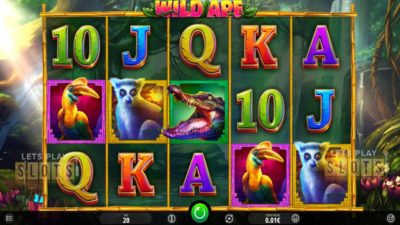 The dark jungles of Africa are dangerous but also fascinating. They have been subject of many movies, TV shows, books and games. iSoftBet has come out with a new slot game that is based on this theme.

The new “Wild Ape” slot takes players to the dark jungles of Africa where they will look to help the Wild Ape.

The game has players going deep into the jungle with some great foliage in the background. Players will see a variety of symbols that they will be hoping to match.

The lower value ones are the usual card symbols. However, the higher value symbols consist of a number of animals. The most valuable of them is the ape. Players can get 25 times their stake if they get five of it in a combination.

The game also has a wild symbol. Though it does not give players any extra bonuses, it does help them to get winning combinations. It does this by substituting for any of the symbols in the game except for the Bonus symbol.

The real draw of the game is the bonus features. There are two active bonus features in the game. The first one is the Wild Ape Re-spins feature. This is triggered when players get three adjacent reels with the ape symbol. Players then get three respins. The ape will then get animated and start smashing the reels to expand them. Additionally, during the respins, the ape symbol will be wild.

The game also features a Free Spins feature. This is activated when all three Bonus symbols appear on reels one, three, and five. Players then get a chance to spin the Bonus Wheel. The wheel has two parts. The outer part can give players six to twenty free respins.

Players then spin the inner wheel. This will decide the number of extra wild symbols that will be added to the free spins. The lowest amount is 10 and the highest is 50. The respins will all actually be played on an expanded set of reels – with double the number of paylines. This means that there are 40 paylines in play and more chances of winning.

iSoftBet did a great job in developing this game which is definitely worth checking out.

Hurray! There is a competition going between users of our site!
You have to do nothing, but browse out site, and win a daily prize. Click here to read more.
You current ranking:
Time Left: 4h 38m 7s