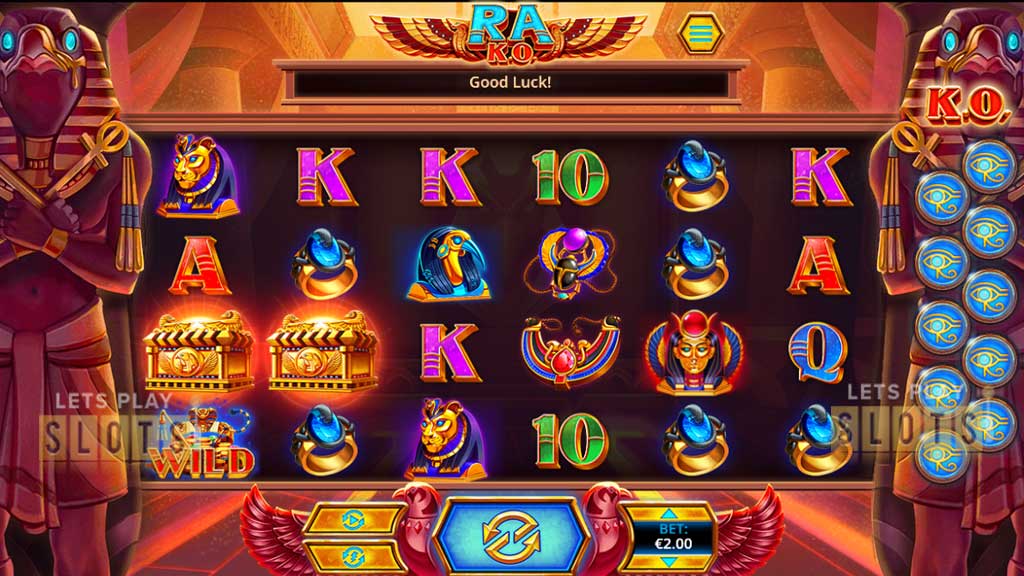 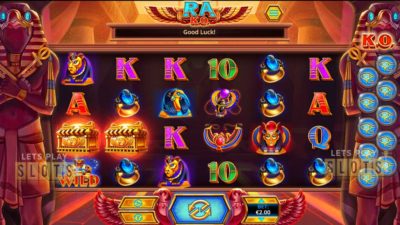 Greed Jade Games has come out with a new Egyptian themed slot called “RA K.O.” In this game, players are whisked away to an Egyptian temple where they get a chance to spin the reels and see if they can come out on the winning side. The slot developer has gone a good job with the graphics and accompanying soundtrack.

The gameplay revolves around six reels and four rows along with 50 paylines. While this grid is definitely better than a lot of the recent slots that have a traditional 5×3 grid, the betting range for this game is quite limited. Starting at $0.10, players can only go up to $25. This medium-volatile slot makes it perfect for new slot players and those who have a limited bankroll.

Mid-stakes players and high rollers will not be draw to this game as the payouts are also limited. When it comes to the game’s symbols, the lower valued ones are the card royals. The more valuable symbols are all Egyptian themed symbols. The mid-level symbols are jeweled pieces of varying types. The next step up is three gods. First, there is Thoth then Maahes. The highest valued one is Ra. Players will get a 40x reward, if he is scored with six of him on the paylines.

The game has a couple of special features that make it work. First, there are two special symbols. The Wild is the pile of coins. As a wild, players can use it to get winning combinations. Next, there is the golden box which represents the Bonus symbol.

One common bonus is the Ra bonus. When he shows up on the grid, he randomly distributes Wild symbols. Players get from four to sixteen Wild symbols. These randomly appear after a gust of wind covers the entire grid.

The game’s bigger focus is on what happens when the gold box is scored. With three of them scored during normal play, the game starts Ra’s Bonus Reels Feature. The bonus reels then spin and they will only feature four special symbols. Players can then start scoring big with the biggest payout fixed at 2000x.

The real draw for this game is the Auto Knockout feature. This is why it is titled RA K.O. This game will automatically knock out symbols on the reels that are part of Loot Box wins. When this is done, new symbols drop down from above. The max cash jackpot that can be won in this game is limited to $1,000. This game has an RTP of 96.09 percent.

Hurray! There is a competition going between users of our site!
You have to do nothing, but browse out site, and win a daily prize. Click here to read more.
You current ranking:
Time Left: 40m 48s