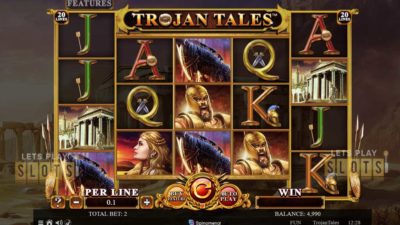 The leg end of Troy took place centuries ago but continues to be popular today thanks to the numerous movies and games that revolve around the legend of Troy. Spinomenal is the latest developer to use Troy and the story of the Trojan War in their new slot “Trojan Tales“.

Players are taken to the beaches of Troy as the Greeks land and prepare for war. The developer has done a great job with the graphics and the background music sets the mood for this game.

This game comes with a 4x3x3x3x4 grid and 20 paylines for players to work with. The max cash jackpot is set at $400 and will allow for multiple wins which can add up when you end up having a lucky day.

This betting range for this game is limited which makes it ideal for new slot players and those with a limited bankroll but not for high rollers. The game limits its wagers from $0.20 to $20. When it comes to the different symbols, the bottom of the paytable is taken up by the various card royals. The higher paying symbols are the various thematic symbols which includes a temple, Helen, the Trojan Horse and Achilles. There is also the Golden Apple which acts as the game’s wild.

To make the game a bit more special, the developers have thrown in some nice special features to work with. The wild can act as any other regular symbol which makes it easier for players to win. It also becomes a giant 3×3 symbol during the Free Spins round. The colossal symbols are also available in regular symbol format. They only land in reels two and four. As for the scatter symbol, when it shows up, it triggers a free spins round for players.

There is also the presence of bonus symbols. Players who land a bonus symbol can spin the bonus reel to determine what multiplier they get. Colossal symbols are also fun since they will move the reels if they are not fully within the grid. Mystery symbols are also available and they will change into any one particular symbol when they land. This game comes with an RTP of 96.30 percent.

Spinomenal‘s Trojan Tales is a nice slot for new slot players and those who are interesting in a low paying slot. Go ahead and give it a few spins when it shows up at your online casino.

Hurray! There is a competition going between users of our site!
You have to do nothing, but browse out site, and win a daily prize. Click here to read more.
You current ranking:
Time Left: 16h 20m 57s