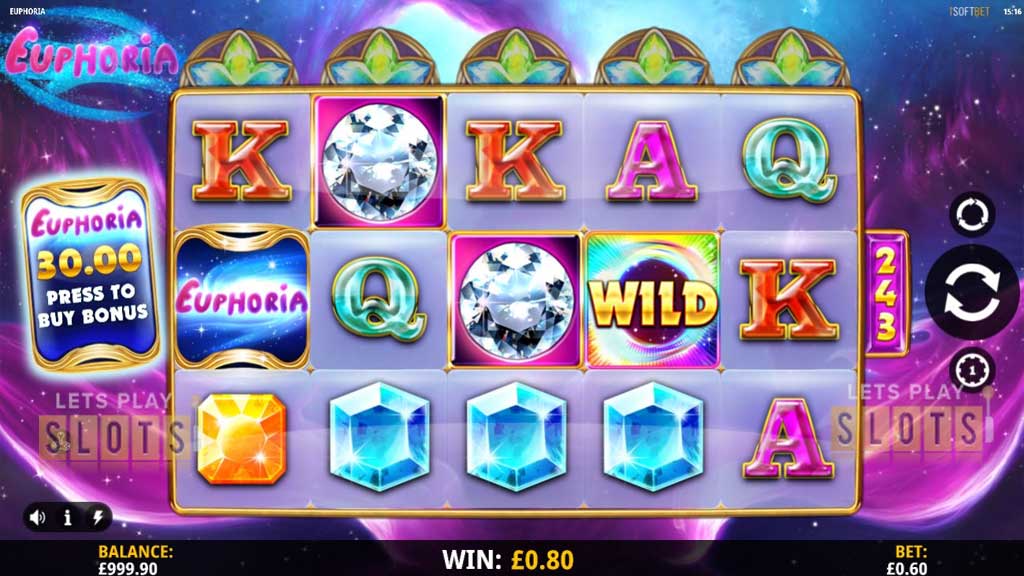 Have A Crack At Some Big Prizes In “Euphoria” By iSoftBet 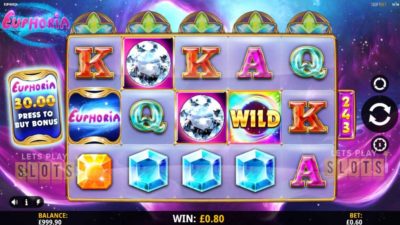 Slot developers are always looking to come out with fancier features and innovative themes with their new slot releases. So it is always interesting when a slot developer breaks the mold and comes out with one of those straightforward slot games. iSoftBet has done just that with its latest released called “Euphoria“.

As a part of the Extreme Pays series, this game is all about the winnings. Players will love spinning the reels on this one and trying to get those big wins.

The focus of the game does not center around its theme but it does present itself well. The game has a gemstone design going, with a simple space background. The music is pretty generic but enough to get players excited.

The play grid is a simple five by three. It also offers 243 ways to win. The game has a standard mix of themed symbols and the card royals. The low-value card symbols are not what players would want to score but they do give prizes. The real prizes are with the gemstones symbols. There are also four additional symbols: the star, the diamond, the logo and the wild.

Players win by scoring at least three of a symbol, with five being the maximum. Players can get a big payout of 20,000 times their stake if they fully get all bonuses and multipliers. The game currently has an RTP of 95.99 percent.

The real heart of the game is the special features. It starts with the two wilds. There is the ordinary wild that substitutes for all of the regular symbols. The other wild is the star symbol. Besides acting as a substitute, it also functions as a multiplier for a win. It can stack so multiple stars can have players winning bigger. The biggest stack is a 243x multiplier. This is done by having all five reels offer star multipliers.

Besides that, there is a feature that randomly drops three stars on the grid. If they do activate, they can give out a 27x multiplier. The game can also offer free spins. Players who land three scatters would be able to get eight free spins immediately.

Overall, Euphoria is a game about scoring big. Players who don’t want themes but pure gameplay will appreciate what this game does. Once you add in the bonus from the wilds, it gives players an opportunity to have a crack at some big wins!

Hurray! There is a competition going between users of our site!
You have to do nothing, but browse out site, and win a daily prize. Click here to read more.
You current ranking:
Time Left: 5h 4m 58s
Gambling is for 18+ though some countries may have other restrictions...Remember you should always Gamble Responsibly
We use cookies to ensure that we give you the best experience on our website. If you continue to use this site you agree to allow us to use cookies, in accordance with our Terms & Conditions.Agree & Close