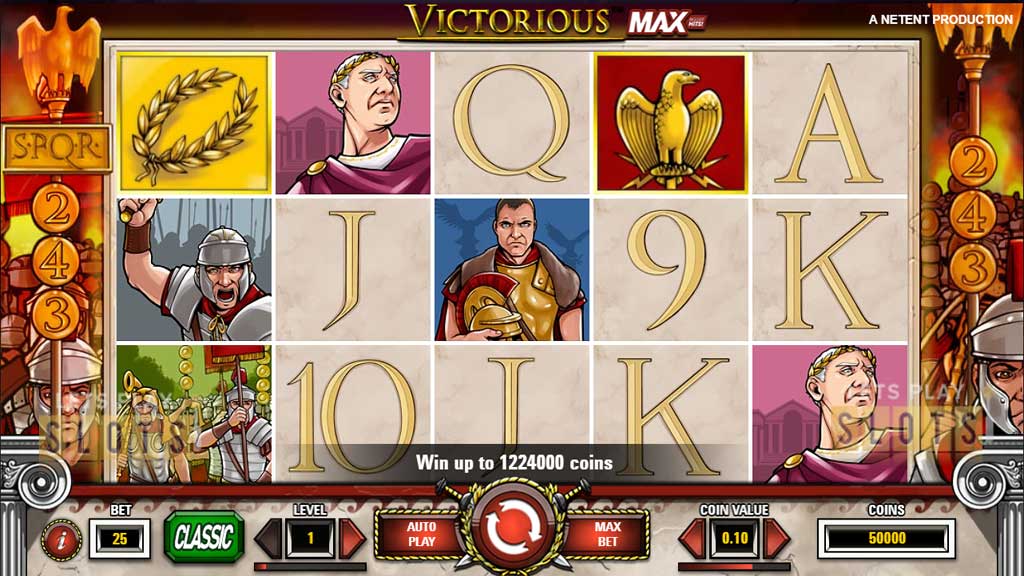 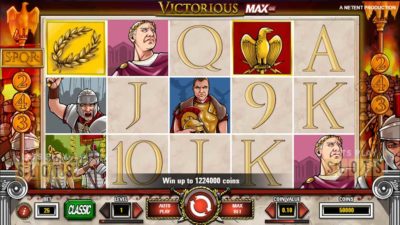 Ancient Rome has been the setting and theme for a number of slot games over the years. One of the most popular slot games that uses this theme is “Victorious” from NetEnt.

This classic slot game has been played by players from around the world over the years.

Now, NetEnt has decided to improve the classic version and introduce a new and improved slot with “Victorious Max“.

Victorious was one of the first slot games with a dedicated mobile version. The classic slot game took players to Ancient Rome to fight for the emperor.

In the Max version, all of the classic features are there but there is an increase in volatility which is great for those who want big wins. Players will have a choice between using the classic rule set that they are familiar with or they can use the Max version which allows for bigger jackpots.

When players start this game up, they are taken to the classic Victorious screen with the five reels and 243 ways to win. All the same symbols are there for players to win, with the emperor paying out the most. The big difference is the selection. Players can choose to play with the classic game and have a maximum win of 1,500 times their stake. Players can also hope to choose to go to the Max route. This is where players have a lower chance of winning but have the potential of getting bigger payouts.

The game has a number of special features. For one, the game has a wild symbol that only appears on reels two and four. It is a Roman Eagle and substitutes for most symbols except for scatters. Another big bonus is the golden laurel wreath. It is the scatter symbol and triggers when players get at least three of them in one round.

Players can potentially get up to 25 respins with this symbol. This is possible only when you get five scatters on a payline. The minimum amount of free spins is 15. The great thing about these free spins is that they have an automatic multiplier. The classic version only gives players three times multipliers. The Max version takes it up to six times.

So if you missed playing the classic Victorious or have never played the game before, do try out the new Victorious Max version.

Hurray! There is a competition going between users of our site!
You have to do nothing, but browse out site, and win a daily prize. Click here to read more.
You current ranking:
Time Left: 14h 16m 53s
Gambling is for 18+ though some countries may have other restrictions...Remember you should always Gamble Responsibly
We use cookies to ensure that we give you the best experience on our website. If you continue to use this site you agree to allow us to use cookies, in accordance with our Terms & Conditions.Agree & Close