Go Back To The Classics With New “Reel King” Megaways Edition 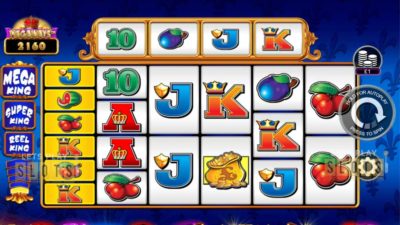 With the thousands of slot games released every year, it is easy to forget some of the classic slots from the past. One of those classics was from Novomatic who released “Reel King” several years ago and Red Tiger Gaming followed up a few years later with a remake in “Reel King Mega“. Now, Inspired Entertainment has come out with a third released with its new “Reel King Megaways” slot.

Players of the previous Reel King games will find this new game very similar to the classic. The Reel King presides over the proceedings as he is part of the spinning symbols on the reels. The background is a lovely blue fleur-de-lis tapestry which turns red when the bonus game is triggered.

The same visual design is there but only modernized and made sharper for the modern scene. The big difference is that the game now has a cheery background tune as players get to play this classic game.

The gameplay set-up is the Megaways standard. There are six rows with reels depending on the level of the game. Some can range from two to seven. The symbols are the familiar mix of low-value and high-value symbols. Players can bet from 20 cents to $20 a spin. The game has a decent 96.23 percent RTP with medium volatility.

Besides the basic gameplay, Reel King Megaways does have some impressive features. For one, the game has a Cascading Reels feature. Players who get a winning combination will see the symbols disappear and then have new symbols cascade down. This allows for potentially new winning combinations. Players can get successive wins if they are lucky.

Players can also activate the Reel King feature. This happens when players have lit up the reels. Players can then get a variety of rewards. The lowest reward level is the Reel King which rewards 8 to 12 free spins and 1 to 2 Reel Kings.

The Super King level gets players 8 to 20 free spins and 2 to 3 Reel Kings. Finally, Mega King delivers 8 to 25 free spins plus 3 to 6 Reel Kings. Lit Reels can also deliver multipliers for any potential wins.

Overall, Reel King Megaways has great gameplay and is definitely worth a few spins.

Hurray! There is a competition going between users of our site!
You have to do nothing, but browse out site, and win a daily prize. Click here to read more.
You current ranking:
Time Left: 2h 51m 50s