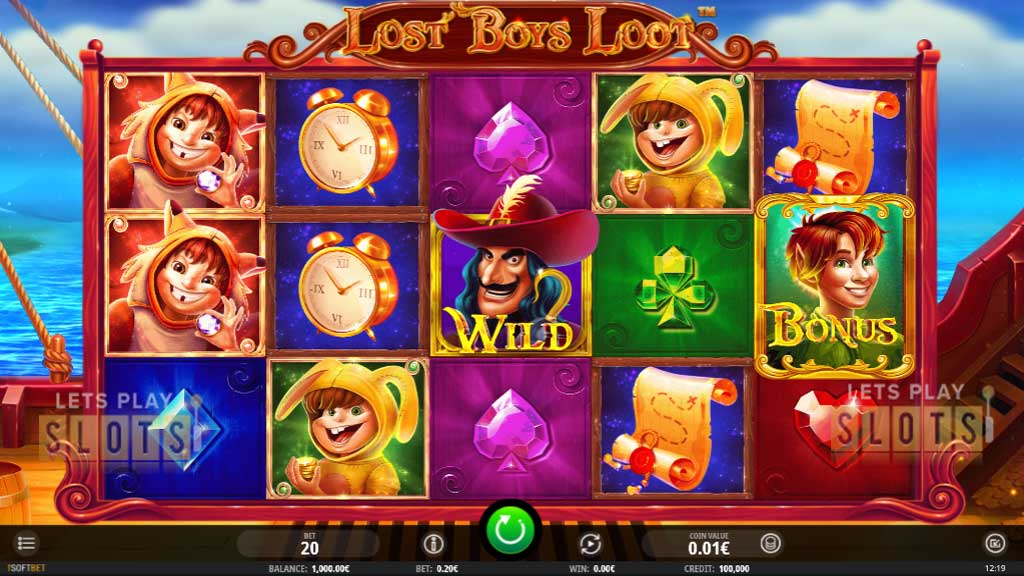 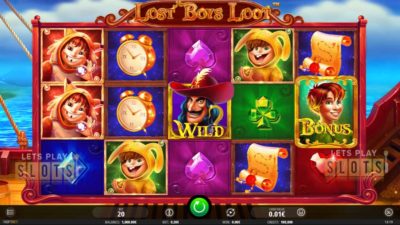 The story of Peter Pan, the Boy Who Never Grew Up is a classic tale that has made an impression all over the world. iSoftBet decided to use the story as a theme for its latest slot game called the “Lost Boys Loot” Slot.

Lost Boys Loot is a great-looking game that features classic cartoon graphics and a fun soundtrack with some impressive gameplay.

Starting this game up, players are taken to an old-fashioned pirate ship. There they are presented with five reels and 20 paylines to play with.

The game uses cartoon graphics to good effect and there is great music in the background to get players in the mood.

Players will be seeking to get winning combinations of symbols. The game has diamond, club, spade and heart gemstones for its lower value wins. If players want the big jackpot, they should aim to get the more valuable symbols: treasure maps, clocks and three characters. The character holding a diamond is the most valuable. Players with five of him get 25 times their stake. The game also has Captain Hook as its wild symbol.

Besides the basic spins, players have a chance to get wild modifiers. These can happen on a basic game spin. For one, there is Tick-Tock’s Wild Chomp feature. This makes Tick-Tock the Croc appear beneath the reels. The crocodile will jump up and eat a Captain Hook symbol if it appears. The result is that all symbols beneath the wild also transform into a wild. The other special is Tink’s Touch feature. Tinkerbell will appear and turn up to five symbols into wilds.

There are also three special features. One is the Dueling Free Spins feature. This is triggered when three or more Peter Pan bonus symbols appear. Players can get up to 30 free spins and Captain Hook increases a win multiplier by one. If both Peter Pan and Captain Hook appear on the same winning combination, then they will fight which will in turn give out additional free spins or increase the multiplier level.

The other free spin is Hook’s Treasure Trap Free Spins. This happens when an extended Captain Hook wild lands on the middle reel. Players can get up to 12 free spins and the wild is locked into position, with winning symbols also being locked. Finally, the Lost Boys Bonus feature is activated when the treasure chest bonus symbol lands anywhere on the reels. Players just pick a treasure chest to get the rewards.

Do check out Lost Boys Loot Slot when it arrives at your favourite online casino.

Hurray! There is a competition going between users of our site!
You have to do nothing, but browse out site, and win a daily prize. Click here to read more.
You current ranking:
Time Left: 3h 5m 13s
Gambling is for 18+ though some countries may have other restrictions...Remember you should always Gamble Responsibly
We use cookies to ensure that we give you the best experience on our website. If you continue to use this site you agree to allow us to use cookies, in accordance with our Terms & Conditions.Agree & Close